The Faces of Givenchy L'Interdit 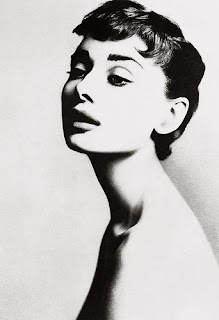 If you are intrigued by the thought of smelling as forbidden, as pure and austerely beautiful as Audrey Hepburn, then you should know which scent to buy. L'Interdit, the scent Givenchy had created expressly for Herpburn, has been released in three distinct versions. 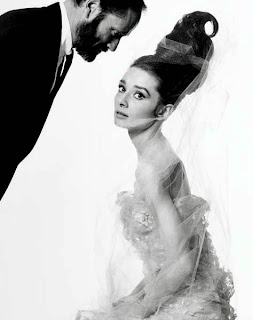 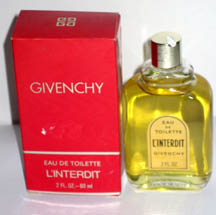 Above is the original L'Interdit from 1957.  I have this version in my collection but the juice has not aged gracefully. I've heard there was a unique strawberry note wrapped up in L'Interdit but it is not apparent to my nose. I'm afraid all of the fruity top notes have all but vanished from both of the vintage examples I've encountered. But based on what I do smell, 1957 L'Interdit is the nearly twin, but more respectable, sister of Chanel No 5. If you took the upper and middle register of Chanel No 5- all the lovely aldehydic touches and the effulgent floral notes and threw them over a white-washed base, you'd have something like L'Interdit. Where No 5 offers a smoldering embrace, L'Interdit uses a light caress. The intoxicating foxy musk and civet touches that give the Chanel such luster have been replaced by refined sensations: the scent of amber scented French soap, the creaminess of the lather it creates when mixed with water on skin and the light musk of fresh cleaned skin, are used to achieve the seduction of L'Interdit. 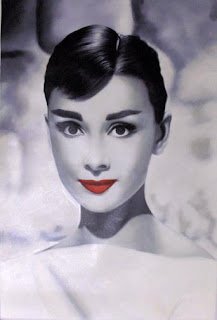 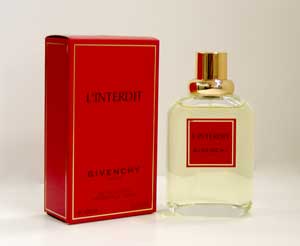 In 2002, L'Interdit was brought back with a reinterpreted formula (noses: Jean Guichard and Olivier Gillotin) and a new look, shown above. I like the red label and gold top/gold neck band; otherwise it is identical to the older bottle, which had instead a gold foil label, a silver top/glass-neck combination. Many customers complained about this reformulation but I must confess to liking it well enough when it was first released. It struck me as a light and pretty fruity floral with leanings towards Estee Lauder's Beautiful, but done in a much sheerer style. Ultimately it failed to move me and has been ignored in a dark corner of the vault for the past several years. Such a sad fate for a scent whose only aim is to sparkle and enchant. A cross between strawberry lemonade and strawberry shampoo, the 2003 L'Interdit could have made a fine first perfume for a young girl. It's especially well suited to the mild days of spring and early summer. 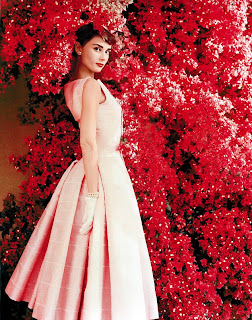 Flagging sales and Givenchy's efforts to recapture history in the form of their best selling fragrances necessitated another shift for L'Interdit. In 2007, Bernard Arnault was tasked with recreating the scent for Givenchy. L'Interdit joined the Les Mythiques line where Givenchy has released new versions of all of their most widely sought-after discontinued scents (Organza Indecense, Givenchy III, Le De etc...). The feminine fragrances of the Les Mythiques line are all clad in lavender packaging as seen below. 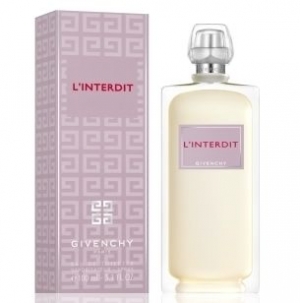 The 2007 formula for L'Interdit is a throw back to the style of the 1957 original. The new L'Interdit is a powdery, spicy floral featuring, "red current, Bulgarian Rose and a touch of musk and incense".  While I continue to prefer Chanel No 5, I believe this version of L'Interdit is the most reliable and smells nearest to the spirit of the original, making it the one I'd choose for all my 'Audrey' moments. 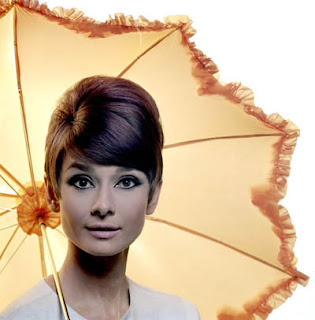 The Vintage Perfume Vault, where the scent of yesterday's vogue lives.
Posted by Amelia at 1:27 PM

Email ThisBlogThis!Share to TwitterShare to FacebookShare to Pinterest
Labels: Givenchy

Hmmm. I just posted a pic of Audrey Hepburn in my latest blog post from last night, a review of Chant d'Aromes. I am of course familiar with her relationship to L'Interdit, but I found her rare and fragile beauty to be apropos for my interpretation of Chant d'Aromes - as well as very evocative of the time period. If I offended you by doing so, i.e. by implying that Audrey should be identified with a different fragrance, then I apologize. That was most definitely not my intention in using her image. :-/

I would never be offended for this- in fact, the images we use- advertising, historical photographs, art and images of our cultural icons are meant to be shared equally. So no worries:)