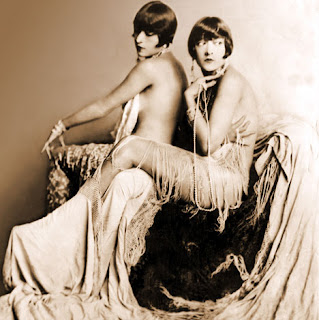 The Dolly Sisters circa 1905; image vintage-spirit-blog
Impudent parfum was made by Charieres Parfums. Charieres, or Charrier Parfums is a French perfumery house operating from 1946 to about 1965. The adderss on my 1960s box set is 06220 Vallauris. Charrier specialized in producing various box sets of miniature perfumes. They gave the boxes titles like 'Parfums de France' implying these were assembled collections of popular French perfumes. 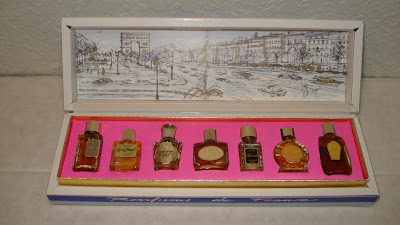 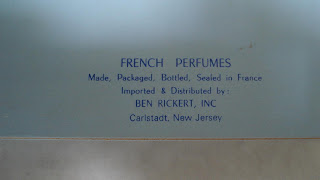 Above one of the Parfums De France box sets from Charrier. These were imported to USA via Ben Rickert Inc, a drugstore type chain that was sold to Azurel back in 1970. Ben Rickert Inc distributed these sets to American retailers in the 1950s - 1960s.
Below you can see one of the boxed sets that Charrier was duplicating: 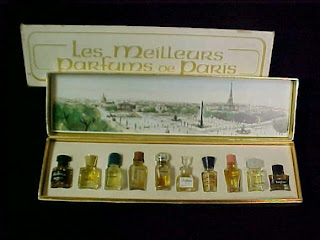 Charrier actually made all of the perfumes featured in their boxed sets themselves. They further confused things by creating 'faux' perfume houses and printing the names on their bottle labels. Charieres appears to be the first name used by this company but they used many others including: Charles the Fifth, Charles V, St Sauveur, Bonnet and more. So for years as these perfumes leave their box sets, people find them as little orphans. Over time we seem to have forgotten that all of them came from but a single source.

Charrier/Charieres churned out a great number of fragrances to fill up all their boxes, many rather directly inspired by the best-selling perfumes of the day. In further attempt to dress up of their humble roots, the scents were packaged in bottles reminiscent of other popular perfumes. It made for a winning formula with many Americans who perhaps had only a vague idea of the real French perfumes and were easily duped. After all, the price was right and the packaging looked good. So we continue to find many vintage sets and even more of those orphaned minis in perfume collections and for sale in thrift and pawn shops all across America today.  These perfumes all date 1946 through ~ 1965 and my list is by no means complete:

Loliette
Malica
Orient
Pamyr
Pardon
Parfum 1800
Parfum Alma
Parfum Anita
Parfum Clandestin
Parfum Pirouette
Parfum Versart
Porte Fermée
Sarine
Tempora
Tender Veil
Très Bien
Treve
Vagabond
Wagon-Lits
White Lilac
Wizzy
Even though pretenders, Charrier's perfumes smell delicious and seem to 'keep' well. For today's fan of vintage scents that means many of them are worth smelling. They are reasonably well made, not great art but good copies of great art and lots of fun to try and wear. I was even more impressed when I discovered that Charieres might even have a few secrets tucked up it's sleeves- like this 1940's 'full sized' bottle of Impudent, shown below. It was sealed tight when I received it, but of course I opened it straight away. 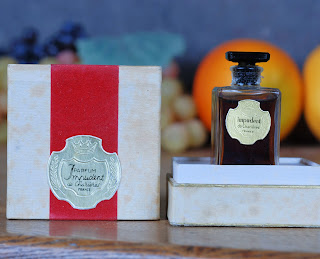 Cleopatra from Cleopatra's Boudoir mentions on her blog that she'd never seen a full size bottle of any of these little perfumes made by Charieres/Charles V and until I found this ~ 0.33 ounce bottle of Impudent de Charieres, neither had I. You might note if you do Internet searches on this house, that many people call it by 'Charles V', one of the more prominent of the faux names Charieres used. 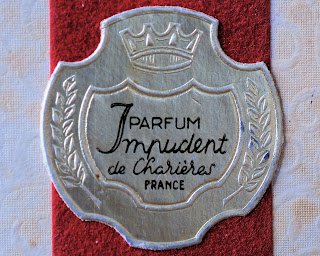 The packaging for this Impudent parfum is of good quality, you can see there is a pretty patterned fabric wrapped box tied up with a red suede ribbon that fits over a nested base. The bottle is simple but of nice quality, made in France, with a solid black crystal stopper. Even before I opened it, I ferreted out my little mini Impudent from a 1960s Parfums de France box set and prepared to do a side by side comparison: vintage and vintage-er. 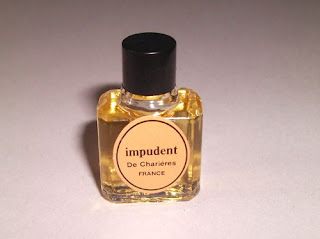 The vintage 1960s Impudent has a simple yellow oval label on a plain little bottle. It smells of a symphony of sweet flowers including orange, rose de mai, juicy jasmine, green violet leaves, velvety ylang-ylang, topped with candied amber on a pale sandalwood/vetiver/vanilla base. There is something a little rubbery smelling, too. 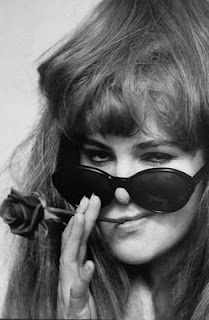 Vintage Impudent is soft yet saucy and not at all powdery. Really pretty, girly and flirty stuff but with a little wink of green and a hint of something frisky in the mix. Besides the rubbery bit, initially it seems to have little in common with the vintage-er 1940s Impudent. The younger perfume smells perfectly divine, a sweet lush green floral scent that reminds me of a relaxed, restrained predecessor of the 1980s classic by YSL, Paris.
But the original Impudent is a whole 'nother thing altogether... 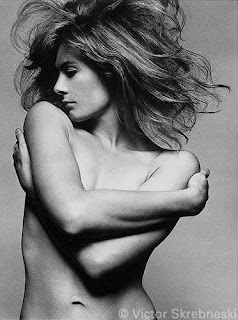 A purring feline jumps out the bottle straight away. It smells of a leather-banded kitty whose slept on a thatch of smokey grass after rolling in oakmoss and padding through a forest of patchouli leaves before coming home to nestle with you. There's a trace of kitty's litter box, too, while the flowers smell faded, indistinct. A rubbery jasmine or could that be tuberose? and possibly some spicy smooth ylang-ylang and heliotrope come trailing along.

Time may have played some tricks, amplifying or forgetting certain flowers but there's been little evaporation, if any, in the past 70 years. At first I wanted to compare this Impudent to Cabochard. It has a similar nearly harsh structure but it isn't nearly so green. Spicy, leathery with a bitter-dry edge, something a girl in the mood for a cigarette and a cocktail would wear; the younger Impudent smells to me of a girl whose in the mood for champagne and a cupcake. 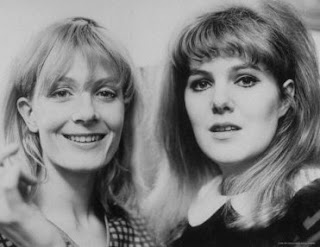 At first I thought the old school Impudent smelled nothing like it's nearly candy coated newer self. Everything seemed wrong for the two perfumes to be related; the one, bubbly yet shy and innocently flirtatious; the other serious, sensuous and full of mystery...
Until I smelled them farther into the wearing. Suddenly there was a common thread, a detectable similarity in the scent DNA. The older Impudent inherited every speck of sinewy stern chypre blood from her ancestors, while the younger had been gifted with a rounder, fruitier nature. But in the end they merge indicating their common point of origin. Both bottles were sealed, new old stock, so the differences whether due to age, condition or perhaps reformulation by their maker, are genuine enough. Maybe it all comes down to a mere roll of the dice.
The Vintage Perfume Vault, where the scent of yesterday's vogue lives.

images of boxed perfume sets from Worthpoint, EBay
images of the Redgraves from google image searches
Posted by Amelia at 10:07 AM

Thank you! I got one of these sets for my birthday and have been really curious about their provenance.

Glad to help. Found any favorites there? I'm wearing Cordon D'Or today. True to it's name, it smells like a golden ribbon of aldehyde enriched incense.