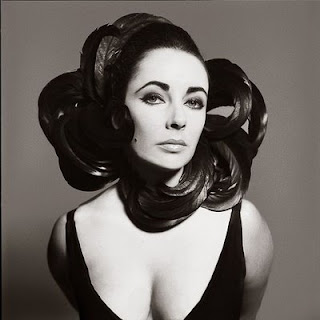 Image from yellsoftlydotcom
This is my favorite photograph of Elizabeth Taylor. It was taken by Richard Avedon in 1964 when Liz was in her prime. Perhaps this Liz could have worn Halston Night and owned it completely. But of course she no longer existed by the time Halston Night perfume was released in 1980. I don't even want to think about the 1980s Liz wearing Halston Night. 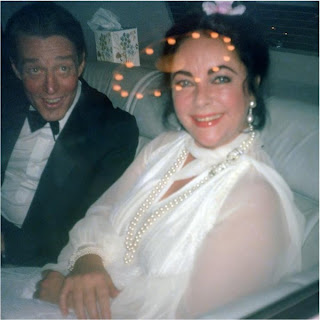 image: FashionsMostWanted
I don't want to think about the 1980 Halston designing it, either. This 1979 photo of Halston and Liz riding to a party shows why; not an enticing image, is it? In fact, my husband nearly derailed this review and indeed put it off for a week by pronouncing Halston Night an 'old lady perfume'. Despite that bucket of cold water, I'll have to defer to my own better judgment in this case. Halston Nights is bombastic, maybe even shocking, but it is certainly not made for an old lady! 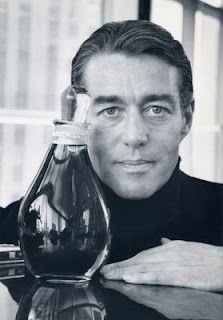 image: Fashion's Most Wanted
Above, Halston with a huge bottle of his eponymous perfume released in 1975. Legend has it that Halston fought to maintain control over every aspect of his original fragrance, which was complicated since Halston had sold the licensing rights to his name two years earlier in 1973. He bucked Max Factor, the controlling company he was paired with; they wanted to put the scent in a square shouldered Chanel style bottle and call it 'Halston Nights'. He insisted on using the now famous 'bean' bottle designed by his friend Elsa Peretti and called the scent simply Halston. Of course it went on to become a mega-hit now known as Halston Classic. According to some it is the number two selling fragrance of all time, right behind Chanel No 5. His second (technically, his third) women's fragrance was called 'Halston Night'. 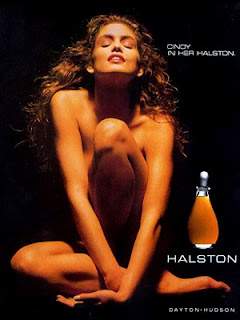 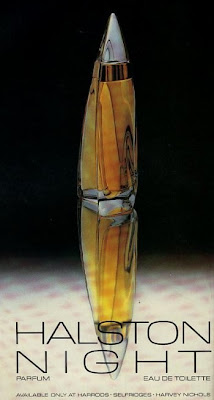 
As popular as Halston Classic was and as aggressively as the name was being marketed, one wonders how it is that his HALSTON NIGHT perfume languished? What's the back story; was it released to appease the deal with Max Factor? Print ads indicate it was exclusive to Harrods, Selfridges and Harvey Nichols. Limiting its distribution to three luxury UK department stores would've made it difficult for the American audience to access, much less appreciate the scent.  This might explain it's lack of success and extreme rarity today. Halston was certainly not a neophyte having released several successful men's scents in the meantime but Halston Night faltered and never caught on.

One view of the Halston Night Eau de Toilette Bottle.
The name certainly seems to fit the scent well but no one tells any stories about the creation of this perfume or its origins. The Halston Night bottles are a far cry from Max Factor's desired, straight laced Chanel mock-up. Below you see the cologne bottle from several interesting angles. 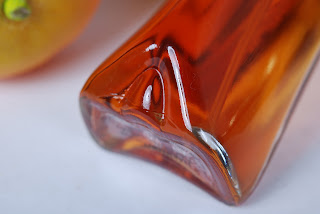 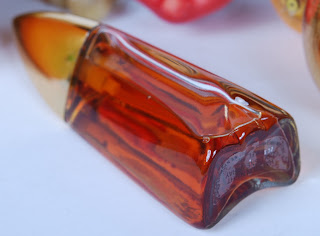 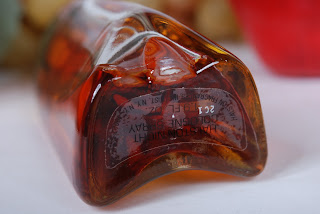 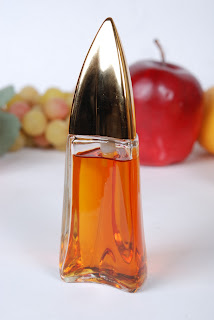 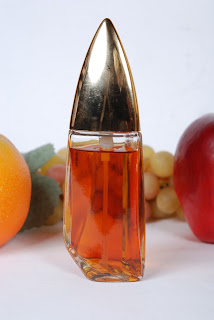 Um, are you thinking what I'm thinking? Photographs don't really tell the whole story as the feel of the bottle in the hand and the look in person is even more highly evocative than you'd imagine. The design is oddly hermaphroditic and fetishist but who designed it? Indeed Halston Night seems somewhat out of line with Halston's emerging 70s-80s brand image as America's proletariat designer. His clothing flew off ready-made racks in JCPenney's but was there a rebellious streak hidden behind the dark glasses and easy laissez-faire grin? 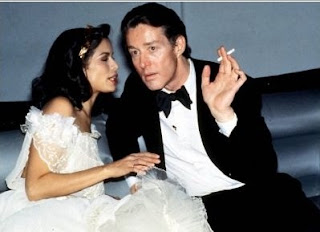 image: boheme extreme
Who wore Halston Night; was it Liza, Liz or Bianca Jagger? Perhaps they all did. But if so, it seems not too many others joined them. If one thing about the perfume stands out now, it's the total lack of attention it enjoyed. Was Halston giving us the finger and no one even noticed?

To comprehend the mystery of Halston Night perfume I had to go back in time to find the virile Halston, that man who was filled with purpose and in charge of his own destiny, the man who would've thought to create this monolithic beast of a perfume and put it on a woman. Don't get me wrong. I like, maybe even love Halston Night but unraveling the how and why of this scent takes time. And moving back in time we see how our little boy lost, Roy Frowick Halston, got his start in fashion and fragrance. 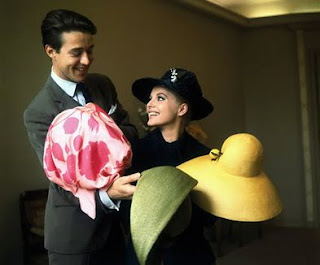 image from Halston: An American Original
Like so many other famous designers Halston started life as a hat maker. Above, we see the young and pretty milliner Halston styling an actress at Bergdorf Goodman Department Store in New York circa 1965. Today there is no equivalent entry point for young designers; instead of doing hats, I guess they do reality TV...

But by the early 1970s Halston had gone from hats to designing gowns and then sportswear, scarves, glasses, and perfume carving for himself a niche among the rich and famous of New York's Jet Set society along the way. 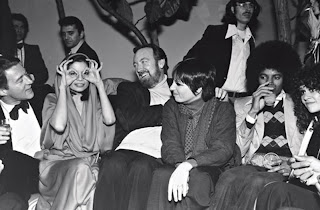 image: anglomainia-mag.com
Above, designer Halston parties with Bianca Jagger, Jack Haley Jr, Liza, Michael and others at Studio 54 in 1975. Along with entree into this privileged crowd came drugs, sex and rock-and-roll-- and instability. Plagued by reckless lifestyle choices, poor health and bad luck followed. Halston began to age rapidly. 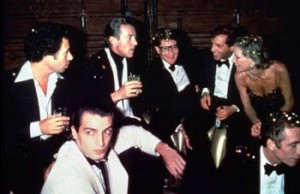 image from HALSTON, 2001(Courtesy of Phaidon Press)
Above, Halston with David Geffen, Mark Gero, Yves Saint Laurent, Steve Rubell, Nan Kempner and Fernando Sanchez at Studio 54 in 1978. And below we see an increasingly fragile Halston with a burgeoning Liz at her birthday bash in 1988. 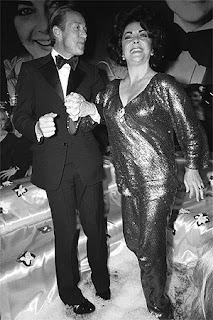 image: guardian.co.uk
Of all his muses, Halston was actually closest to Liza Minelli. Perhaps he created Halston Nights for her:

Liz, looking waif like yet ravishing in a Little Red Riding Hood inspired Halston number in a polaroid shot taken by Andy Warhol in 1977. Equal parts diva and gamine with a maniacal, nearly male energy; I can almost smell Halston Nights wafting off of her now...
Halston Night is classified as a sweet floral by Nigel Groom. The big generic perfume oil houses that offer "Halston Night Type" perfume oil blends describe it as a spicy, elegant and classy Woody Chypre. According to those sources, Halston Night has top notes of bergamot and lemon; middle notes of patchouli, rose, jasmine, and sweet carnation; base note of amber, oakmoss, and moss. 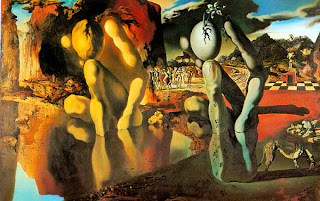 image: Metamorphosis of Narcissus 1937 Salvador Dali
Halston Night features a famously hefty dose of narcissus oil as well. HN wears like a typical 1980s chypre, heavy on the amber and moss, without much in the way of oakmoss. It reminds me of Krystal and Cher's Uninhibited; its strength is intense and the feel is definitely evening and nearly psychedelic. When I smell Halston Nights the effect is initially euphoric. There is a something uplifting, almost bubbly in the mix of bergamot, lemon, narcissus and sweet honeyed carnation. The patchouli is hushed, merely enriching, as are the rose and jasmine, humming along filling everything else out. The moss gives Halston Nights a nice sultry green counterpoint lending a dark feel while staying well in the background of the amber. Halston Night was made in edt, parfum and finally cologne versions. 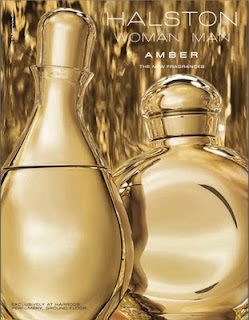 image: perfumenews.blogspot
The Vintage Perfume Vault, where the scent of yesterday's vogue lives.
Posted by Amelia at 2:45 PM

I've never met Halston Night...and probably never will...but I feel like I just read a good biography. Thanks for the peek, at least. (What with oakmoss and narcissus and such, I certainly now know to not turn away should I happen across some, however. :) )

Yes. Well... Maybe some might show up on your door. Someday. You never know;)

I've got to remember this one, in the unlikely event I ever find it! This was an enthralling read!

One of the amazing thisgs about Halston - his clothes as well as his perfumes - is his celebration of the strong, gutsy woman - and her strong, gutsy perfumes. I have to admire that - and lament that 'womanhood' these days is usually promoted in advertising by teenagers or waifs who have no clue...

I could see Liz Taylor wearing this. Surely, one of the most beautiful women who ever lived!

I do not know this one but when I think of Halston I just see Liza Minelli for he was a great friend of her and she wore his clothing so well.
I have always thought Bianca Jagger beautiful!

tarleisio: You have to love Halston. So brilliant but also tragic and flawed. You're right that he never condescended to the women he dressed- or if he did, he kept it very well hidden. In fact, it seems the women in his life really loved him. And the legacy of his clothes and perfumes is wonderful too!

lady jicky: Halston had great taste in the girlfriend department, didn't he?

I remember having had a Haslton perfume long ago, and right now I can't remember which one is. Only that it was good enough and it smelled lavender perhaps..

Oh, think hard- which one was yours? Was it Catalyst in the kooky scientist like bottle? Or maybe it was Halston Couture... the one with the sterling silver top on the bean shaped bottle? Or maybe you had that one with Italian sounding name? Or was it the super rare one, the first Halston for women, circa '74?! In case you haven't noticed, I'm already a little nutty for this guy's perfumes, so inquiring minds want to know!;)

ANYWAY. I've never been a big chypre fan, unless the chypre in question is quite floral. However, your mention of narcissus and carnation in Halston Night is intriguing me... hm. Might scout ebay.

I *love* Liz' feathery hat and her general air of "just try and get me" in that photo. Wasn't she gorgeous? I love the strength of her eyebrows.

Halston loved to keep us guessing!

As far as not liking Chypres, NIGHT has a whole lot of amber in it, too. So you might not think it a typical Chypre... But it's pretty pricey unless you get lucky and score some at a flea market or second hand sale like I did.

Liz was gorgeous. And a hell of a fighter too, I'll bet;)