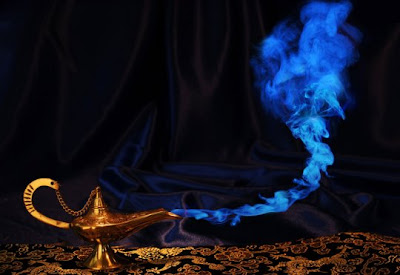 Recently Melissa asked me how can you remove a stuck stopper from a perfume bottle. Hopefully I can help out since I've tried quite a few methods, so let's run down the list.
When I first encountered stuck stoppers, I was told to try ice or cooling the bottle. I guess the thought is that the glass will retract and things should loosen up a bit. Well, cooling methods haven't worked for me. Running a bottle under warm water may work- if the lid is a threaded plastic or metal type and dried perfume residue is causing the lid to remain stuck-tight. Then it's just a matter of heating up the metal or plastic and twisting it off. The water might damage any paper label that's there, so keep a towel handy.

But the real challenge occurs when you run across a ground glass stopper that has become stuck or frozen in the neck of the bottle. I've even cut the cord on a sealed bottle only to find the stopper is frozen in place. So what to do? If you can access enough of the underside of the stopper, which is not always easy, old Chanel pamphlets (which used to come tucked into the perfume bottle box), advised you to tap evenly all around the stopper while applying gentle pressure until it comes unstuck. Good luck with this method! It probably works but I found it's difficult to pull off- you need some special kind of tool small and weighty enough to tap on such a small area and it requires major-league dexterity. The method perfected by my husband, which seems to work best, requires two identical pry tools- try two butter knife blades or two identical pocketknife blades. He lines the bottle up (I hold it) and works the two blade edges along opposite sides of the bottle (that's 180 degrees apart) nestling the edge of the blade right at the stopper and neck junction. He does it so the handles of each knife are on opposite sides of the bottle. Then he quickly, firmly, evenly pushes up on one knife handle while simultaneously pushing down on the other. The resultant force pops the stopper off the bottle, usually on the first try. But he isn't shy or hesitant about the movement- I think you might just chip pr break off the stopper top if you aren't smooth and decisive. I might recommend wrapping the top of the stopper or taping it up first if you do try this, so the top isn't damaged as it flies off the bottle and lands on the floor. Another technique I've used, for smaller bottles with round stoppers (like a small bottle of Poison perfume), is to wrap the stopper top in soft cloth, grasp it with a small pliers and gently turn it off. This method is easy, so you might want to give it a try first but don't use too much pressure or you will snap the stopper off at the neck for sure. Good luck but remember, no matter which method you try- you do run the risk of chipping, cracking or worse yet, breaking off the stopper top. Below you see the tragic result of an attempted removal gone wrong. That being said, the two knife method has never damaged a bottle of mine. 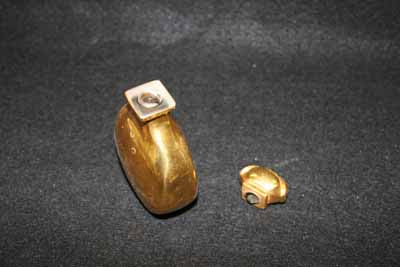 And it's always worked. Except with one particularly old, square-shaped stopper on an older bottle (1800s) with no clearance between the stopper and the bottle (a short neck). In that case, I tried everything that I've told you about here and more but nothing worked. I held onto that bottle for quite a while, trying to decide what to do about it. I didn't want to ruin the bottle- it was so old. But the juice inside finally won over. I really wanted to smell it! So I went for the most extreme method I know- drilling and emptying. The procedure was achieved using a small masonry drill bit called a glass bit, that bores a round hole into glass. You need to build up a coffer damn on the glass so you can keep a puddle of lubricating fluid to cool and help the bit get through. To do it, make a ring of silicone putty, stick it to the glass area around where you'll drill into the glass. Fill the ring with a few drops of light machine oil, like 3-in-1, or another suitable fluid before you start. I held the bottle in place with more silicone putty. It went beautifully; I was able to drill through without any contamination by going slow, and I kept an absorbent towel nearby to soak away the oil as I got down to the last layers of glass. Then, I decanted the contents directly from the hole, plugged it up and I was able to display the 99% intact bottle. Well, I hope this helps at least one of you get into that bottle of perfume you've been hanging on to with the stuck stopper. Let me know how you do!

The Vintage Perfume Vault, where the scent of yesterday's vogue lives.
Posted by Amelia at 9:13 AM

So, what was the result when you drained the bottle? How was the fragrance? Inquiring minds want to know!

By the way, thanks for all the hints about unsticking stoppers. I haven't run into one of these yet, but I'm certain I will as my perfume obsession grows!

Thank you so much for the info!! It must be a "Man Thing" but my husband as well is the one who has opened many a stuck stopper. He prefers the wrapped stopper/plier method as I pace & sweat. And I as well has the stopper disaster on a bottle of Nuit de Noel. Just when I thought it was giving in it broke off at the base & flew across the room. After crying for a while, I eventually took it to a glass expert who was able to put the stopper back on. It's almost impossible to detect the repair. And after all that my "Superman" husband was able to get the stopper out in one piece. The thorn in my side right now is a bottle of Bellodgia. I'll try your methods & if not I'm getting the drill!!


am clearing out my mothers estate and found a beautiful large bottle of Lucien Lelong Orgueil... could someone tell me about this(it smells beautiful.)

Patty- The scent you asked about was called "Come to Me"- what a great name! The scent was kind of light, which I did not expect given the age. It was an herbal lavender over a wan musk. I still have a little of it but sadly the bottle was a rare casuality of our recent move.

Melissa: Aren't husbands great! Good luck on the Bellodgia, it's such a yummy classic, and one of my all time favorite florals.

Piphy- I've never smelled that one but it sounds delish. Check out the Perfumed Court.com, they sell decants and have a brief description of it. Also you can ask at Perfume of Life (POL)- someone there will probably know.

I must say I've had great success with the freezer method. I have an ounce of vintage Cabochard whose stopper was stuck fast. I bunged the whole thing (minus the grey velvet ribbon) in the freezer for about half an hour and it came out like a charm....Well worth that wait!

Wow that's great to know; it's sure safer that stopper popping. Nothing of mine has budged with the freezer method... I let that bottle of 'Come to Me' sit over night- but maybe our freezer isn't dry enough. I love Cabochard, btw:)

Folks Go to SORCERY of SCENT for Dimitri's definitive guide...