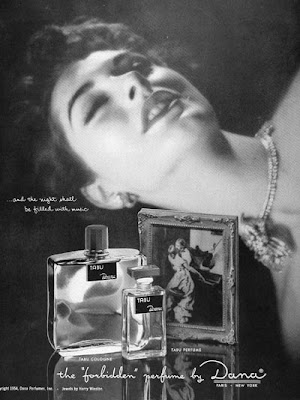 One of the most famous stories about Dana erfume is that of its first perfume, Tabu. It’s said that Serra asked Jean Carles to create ‘un parfum de puta’, and Carles brought him Tabu. Since then clever magazine advertisements for Dana perfumes stated the perfume was designed just for a specific type or even a specific coloring, of woman. I'm not sure that was an idea of Serra's so much as an idea of clever marketing men. There were more than 50 Dana perfumes created but it seems that the majority of these had limited release only in Europe (or France), so most of these I've only seen in photographs. From what I've gleaned there were only about 10 Dana perfumes released here in USA. These were Tabu (1932), 20 Carats (1933), Canoe (1935), Emir (1936), Platine (193x), Sirocco Donna (1942), Voo Doo (194X), Priorite (1949), Imposible (1950) and Ambush (1955). The dates indicate when these perfumes were created, not when they debuted in America. Of those, I've only smelled Tabu, Emir, Ambush, Canoe, Platine and 20 Carats- hardly a fair sampling of all this house had to offer in its prime.

Probably the most familiar and accessible of all of Dana’s original scents is Tabu. The sensation that Tabu created may have cast a shadow on those scents that were released soon afterwards. There are so many I haven't smelled yet... of those VooDoo, Sirocco Donna, Priorite and Imposible, all US releases, remain high on my “most wanted” to-sniff list. Of course I'd love to find any of the beautiful old French Dana perfumes even more. 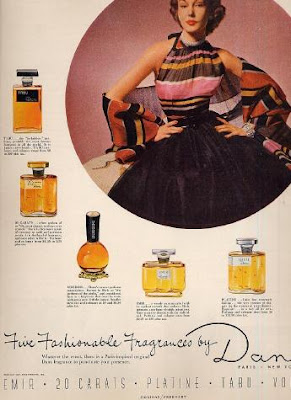 But of those I've tried the two that captivated me right away were 20 CARATS (20Ks) and Platine! They are kind of nifty also being the only paired fragrances I know of among the Dana creations. Each perfume is named for a precious metal and speaking to the luxury and presentation values of this brand, each perfume came with large flakes of real gold or platinum swirling around in the perfume. Uber modern designer-perfumer Solange Azagury-Partridge has given us another pair of perfumes with precious materials incorporated into them by putting diamond dust into her very delicious (psychadelic candy amber) chypre perfume, Stoned and meteorite dust into it's partner, the lovely Cosmos.

Dana's 20 Carats came out in 1933. But in this time perfumes were produced and sold in perhaps only one shop and for Dana that was in Paris. So American women did not even know about these perfumes until they received them from boyfriends and husbands stationed in France during the War. In the late 1940s Dana began to export a select number of its perfumes, including 20 Carats, to America. It surprised me to learn that 20 Carats continued to be a best selling luxury scent in high-end department stores here in the US until the 1980s when it was discontinued! But my bottle of 20 Carats came in a numbered box (#3302) from the late 1940s or early 1950s. It’s the cologne version which according to the box was “blended in the USA from imported essences”. The bottle had lain neglected on my back shelf for the past couple of years; I'd haul it out periodically but I never cracked the thick cardboard seal open. Then, just before Christmas this year, I snagged a pristine, sealed bottle of Platine (which I'd never heard of either). Something about having this beautiful pair inspired me. So right then, I popped the bottles open. As soon as I smelled 20 Carats, I knew right away that this perfume was fully wearable and had to be immortalized here on TVPV.. 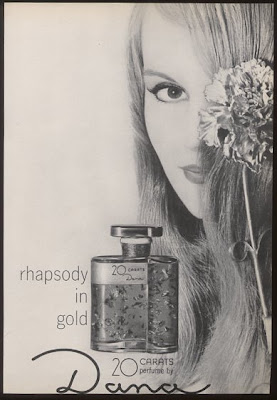 ‘Carat’ can refer to either gold or gemstones. But with the gold flakes and rich color, you can tell it’s named after the metal. Yet I can just as easily picture it being named after a gorgeous (red!) 20 carat gemstone. And how does 20 Carats (20ks) smell? The first notes to fill my nose sweet orange, cherry, whisky and tobacco, followed immediately by the spicy-powdery, almost rubbery nutmeg brought to mind images from an upscale 1920's speakeasy- sipping on a Manhattan cocktail, the muted horns, the smoky room. The scent releases a relaxed, warm glow that says the party has been on a while. Myrrh and fennel (or anise), and tangetes or another herbaceous flower adds some depth to the impression of rich spice.
But the heart of this fragrance opens up to reveal fully a carnation theme with cinnamon, precious balsamic and root beer notes, accompanied by powdery sweet helitrope and patchouli. The dry down has a nice touch of woody, rooty vetiver to accompany the sweet balsams, tonka and patchouli. Powdery musks and a tiny bit of animal (civet?) are also apparent. Hours later the fragrance has fully settled leaving only traces of the sweet powdery heliotrope, vanilla like tonka and cinnamon on the skin. In reading about this scent, I noticed a few people referred to it as a fougere, which if you're unsure, is described as: Fougère means "fern" in French, is a fragrance family including fresh, floral, herbaceous and woody/warm elements, typically blended with notes like: bergamot oakmoss, lavender, coumarin, tonka bean, sandalwood, and geranium. While a fern doesn't have a distinctive smell per this particular fragrance classification implies a mossy green, forest-like aroma(quote from BellaSugar.com) There may be oakmoss in this blend but what I smell is vetiver, I'm almost sure and it is not enough to make a green or foresty base. 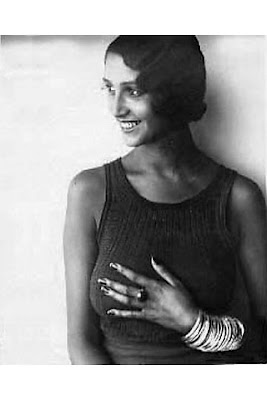 Instead, I find this to be a seductive cheerful perfume, relaxed and rich (as I mentioned)- if you picture a cocktail, a cigarette, the allure of gold jewelry against tanned skin, you will get the picture. I think Terracotta by Guerlain is along the same lines. 20 carats completes a picture of a woman of grace, ease and enjoying the good life circa 1933. If Serra had Tabu created as the perfect perfume for a puta, then I will try to guess for what sort of beautiful woman this perfume would have been made… It could only be Renee Perle! Ms. Perle was the famous and fabulous muse of Jacques Henri Lartigue. They met in 1930 and the rest was captured and immortalized by his photographs of her. Laird Borrelli on style.com wrote that, “'Jacques Henri Lartigue… called her "angel". The revered photographer met his muse in 1930 on the Rue de la Pompe. He thought she was Mexican, but he guessed wrong; Perle was Romanian, and a model once employed by the French dressmaker Doeuillet. "She is beautiful," Lartigue told his diary. "The small mouth with the full painted lips! The ebony black eyes. From under her fur coat comes a warmth of perfume. The head looks petite on her long neck."
20 Carats came out 3 years after the pair met, but they were still together at that time. 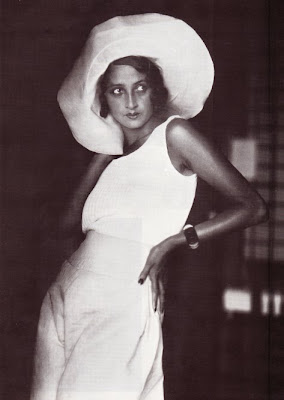 As I imagine it: the lovers are together shopping in Paris. They stroll along the rue de la paix perhaps stopping off before lunch at the Les Parfums Dana shop on 9, rue de la Paix. Renee picks up a perfume bottle; she is drawn to the golden flotsam contained within – it matches the gold on her arm. But before can purchase the perfume for her, it is lifted from his hands and presented to her with a flourish by the perfumer… He has just finished 20 Carats, his latest creation, and brought it to Javier Serra in the show room of the Les Parfums shop. And looking up, he sees before him the vision of the woman he made the perfume for. Or so goes my romantic dream. At least it’s plausible. 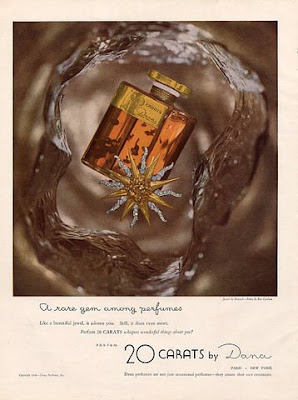 I enjoy wearing 20 Carats way more than I might expect to, given its formula is nearly 75 year old. But Carnation is a favorite of mine and this perfume has a precious amber musky golden deliciousness to it. It’s furry but not like wild animal fur; it’s like the soft, luxurious belly fur of a contented house cat. It might be a tad powdery (“old lady”) for today's hip younger perfumistas but I hope somewhere someone under the age of 30 is wearing 20 Carats and loving it for all it is. Look for my review of Platine, coming next. 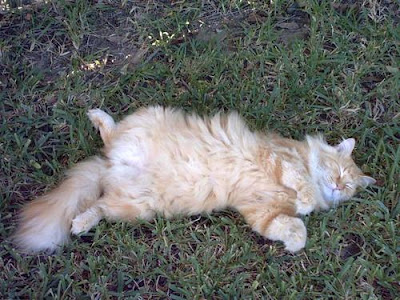 While I love the fact that we've come such a long way, baby, to be able to afford to purchase luxury goods for ourselves, there is also something so lovely about there having once been certain rites of gift-receiving passage: Flowers from a first boyfriend, perfume as a gift from husband or lover, diamonds after 40.

As for Dana, I've always loved Tabu. Now, to get my hands on some of this Carat juice!

You are lucky to have Tabu as a friend. If you email me your address, I can send you a little 1 ml sample of the 20 Carats to try. Contact me at millascent@gmail.com!

Oh, that would be so lovely! I emailed you, thanks!

I loved going throwyour web page I seen many of the cologne's and some Parfums I have, I was thinking of selling some of them but had no idea where to sell them or how much to put on them, do you sell them for people? I truley mean I have lot of them small tall large and tiny, old to new.
if you do would you let me know more about it
sharmainel@gmail.com or sharmaine@tds.net thank you

I know perfume fragrances come and go- but I loved 20 carats. I remember the last time I found it. It was on clearance at a small perfume shop in a mall. Bought all three remaining bottles. Alas, they don't last forever.

I have a bottle of perfume that I am trying to get more info on. It is 8 and 7/16 ozs. The box is white triangled shape with a red stripe ending in a point going down the front and back. It says PULLMAN and then Dana New York Dist....Eau de cologne Made in France. I don't know anything else about it. Bottle has never been opened. It does say No. 9208