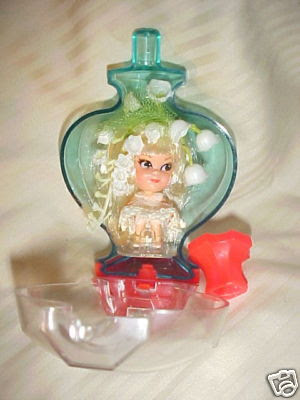 This may seem like a BIG departure for those expecting strictly 'serious' perfume content, but I'm convinced that Mattel's Liddle Kiddle Kologne Dolls were, in part, responsible for my perfume fixation. Made in the early 1970s, the little dolls were about 2" tall. Each came encased in a plastic pendant heart and each doll represented a specific flower. Lily of the Valley, Violet and Orange Blossom were my favorites. In addition to being dressed like a blossom, each of the dolls and their containers had a very strong synthetic, solifloral flower perfume note infused. I spent endless hours playing with my Kiddle Kologne dolls. I was obsessive about trying to keep the dolls inside their cases to hold the scent as long and strong as possible.

Well, I almost fainted when I saw these new little Barbie Thumbelina Twillerbabies... 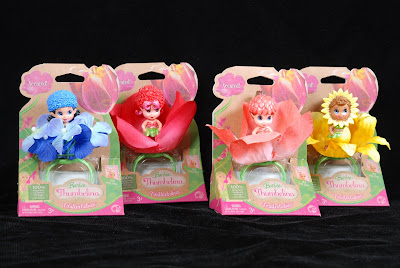 ...because they're almost a direct copy of my beloved Kiddles and of course, they're SCENTED! Just like the Kiddles. These little dolls have soft (and safer, I assume) petal housing so they're not quite identical. Still, they are extremely appealing to me in that nostalgic way you can't resist... and in fact I could not resist buying them. I got the ones that smelled best (comparitively, of course!), which were Hydrangia, Rose, Daliah and Sunflower; the Daisy and Tulip were too watery for me. 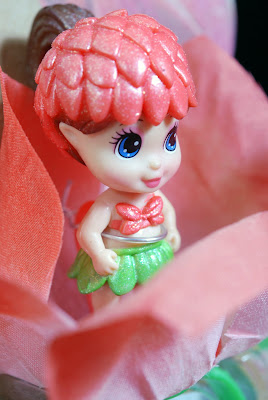 Above is the Twillerbabie called Dahlia. She smells of soft vanilla with maybe some gentle coconut underneath and looks just like her flower. The sunflower is my favorite scent of the bunch. I thought she was a daffodil and I still think she smells of jonquil. The rose doll smells of a bubblegum rose with a hint of saffron. Hydranga is sweet pea-ish and powdery. 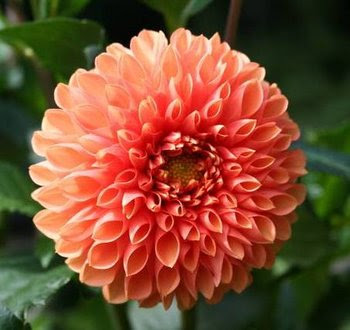 (photo of a Dahlia from Garden.Lovetoknow.com)

The original Kiddles were among my favorite toys growing up. They had a weirdly plastic-floral fusion of scent that I've never forgotten. I still smell a similar note in grown-up perfumes now and again and I find it's actually quite desirable. If you look at Mattel's whole range of scented Kiddles of the 70's you'd see that many were actually based on food scents, sort of early gourmands for kids, if you like. The Kiddle Kola dolls came in bright day-glo color hair and had soda flavors like orange, lemon-lime, cherry, cola too. 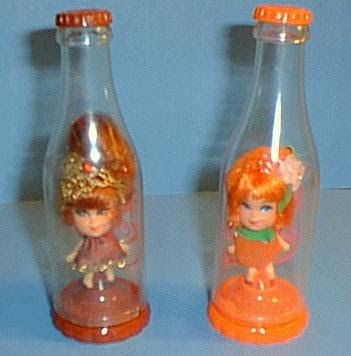 I have no idea if anyone outside of America ever saw these toys. But I wonder how many perfumistas here in America remember Kiddles?
Posted by Amelia at 8:25 PM

OMG! I was just searching for Kiddles on line and came upon this blog! I found all my old Kiddle Kolognes from when I was a kid. I have about 5 of them all in mint condition in their cases! Yeah, talk about nostalgia! So cool!! :) Monique

I too was just browsing the WWW and came across your blog. I still have one of the perfume kiddles and one of the kiddles in a bottle. There was also a skiddle kiddle that I have too. It was my sisters but somehow I ended up with it. Its one of these little dolls attached to a device that makes is walk. Anyone remember these?
Robin

this perfume seems to be very interesting even though I haven't bought any of these products yet.

I have one of those Skiddle Kiddles that walk and run and have been trying to find someone else that remembers them(: I don't have the pushing device anymore. Or maybe it's just misplaced. The slogan was something to the effect off "Little dollies that can walk and can run, Skiddle Kiddles..." Mine has pink dress with white polka dots!! Cool!!

I used to have beauty pageants with my kiddles and a different one would win each time. I had two shoe boxes turned upside down and shaped like a "T" runway. I would announce each one as being 2 inches tall and weighing 2 pounds and having purple hair or whatever. Pretty funny to think about considering I was probably 5 years old!