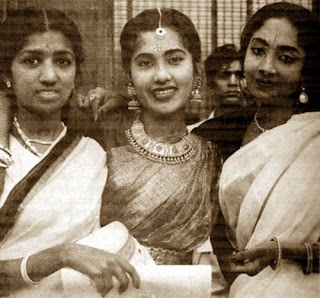 Lata, on left.
Perfumes from other cultures always fascinate me. Today the 'vault is hosting Lata eau de parfum (released 1999/2000). Lata perfume is named after Lata Mangeshkar, the famous Indian 'playback' singer. If you've ever watched a vintage Bollywood film (1940s- present) chances are you've heard Lata sing. Her perfume came about when Indian chemist-entrepreneur-turned-perfume-manufacturer Deepak Ramrao Kanegaonkar began creating and branding perfumes around Indian celebrities; Lata was his second and, according to some sources, the most acclaimed of his scents to date. Yet according to other sources, the perfume was developed by Mr Charles Caruso of SFA, in Grasse, France. 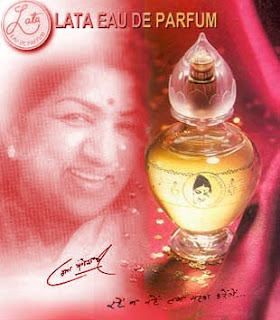 Lata eau de parfum is made of 78 different essences. An emphasis was placed on sourcing and using only the finest quality ingredients; French rose and other floral and fruit essences and spices were blended with the best Indian Sandalwood and musk. The result is a unique scent built to suit Indian tastes and reflect Lata's attributes, since Lata was intended primarily for domestic Indian distribution. The spice note is unusual, very quiet and dry but persistent; grounding, meditative- maybe mace or nutmeg and a dusting of cinnamon. I don't detect much in the way of many of the spices I commonly encounter in perfumes such as pepper, clove or cumin. Everything is very well done, it's just slightly exotic to my nose- as different emphasis is given to familiar notes. Rose, jasmine and lilac (I think) dominate the floral notes. Musk gives this perfume a soft glow but the real star of the show is the sandalwood. 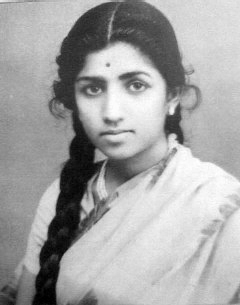 The dry-down is long lasting and blissful, a nearly perfect showcase of a bright and smooth mellow-tart sandalwood, that shines on and on especially on fabrics but on skin, too. Such high quality sandal is something I don't smell too often in perfumes - of any era, truthfully.  And even though I don't really connect with the whole story of Lata on a personal level, the quality and scent alone are reason enough to treasure Lata eau de parfum. The packaging is best described as well done for such an effort. It features a gold design of music staff, notes and a cameo of the image of Lata. 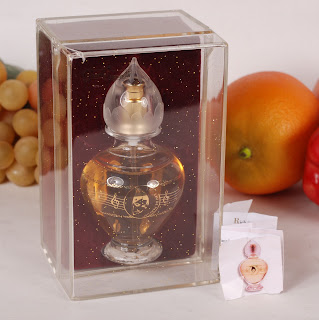 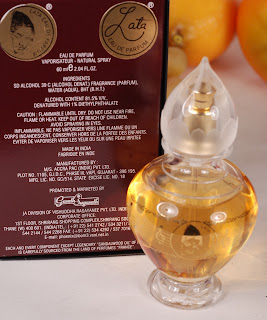 I do get a kick out of Lata, the singer. An icon in India, at one time it was said she held the World's Record as the single artist who had recorded the most songs. I gather some (or at least, one) of the younger Indian singers hate Lata vehemently; they say she kept many aspiring female playback singers from getting a chance to work, as she held exclusive contracts to do so much of the playback recording for females parts in Indian films. 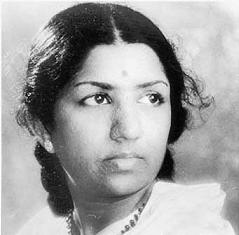 Nevertheless, Lata won my heart when she explained that as she got older and found she wasn't able to wear the beautiful dresses any longer, perfume took on special significance for her. She said that as she traveled and performed all over the world, she always made sure, each place she went, to buy one very special perfume from that place, to add to her perfume collection. She joked that later on, her family and friends would tease her whenever there was an unexpected knock at the door- "Lata, hide your perfumes, it's the IRS (or Indian equivalent) calling...."- I hope I got all the details right for this story- it's so charming and endearing. And I can only imagine that Lata must have one fabulous perfume collection! But even so, Lata claims to love and treasure her namesake perfume on its own merits. 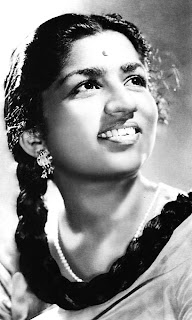 As time has proven, Lata did not sell as well as originally hoped- the price for the perfume was set too high- although the manufacturer claimed it was due to the cost of the materials themselves. Indian Sandalwood especially has also become nearly impossible to source over the past 10 or so years... and sadly, making Lata eau de parfum a permanent resident of the Vintage Perfume Vault.

Is it discontinued already?

I double checked all sources- yes it seems Lata edp, as far as now- is discontinued. Not to say you couldn't find a few bottles tucked away in a shop somewhere.