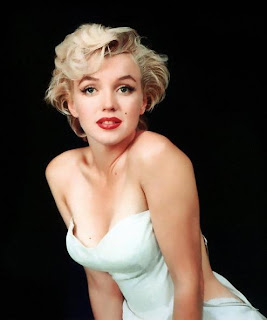 If a picture is worth a thousand words then these two photographs of Marilyn Monroe say more than enough about how I feel Emeraude and Shalimar stack up against each other. They are remarkably similar and a side-by-side sniff should be enough to convince you can that they must be related in some way. So what's the story about these two "twin" scents? Emeraude was created by Francois Coty in 1921; Shalimar by Jacques Guerlain was born four years later in 1925. At first it would seem perhaps natural that Emeraude would be the older, wiser sister and Shalimar the younger impetuous one. But if a well-loved story is true, Shalimar was actually created when a large quantity of some newly synthesized vanilla was unintentionally dumped into a vat of Jicky. Jicky was composed by Aime Guerlain in 1889. It is widely credited as the world's first 'modern' perfume.

The revolutionary fact of Jicky wasn't it's individual elements- all these ingredients had been used in perfumery before; rather it was the way things were combined- new synthetics mixed with traditional distillations, the merging of yin and yang elements, masculine with feminine. This bold blend of florals and aromatics, on a base of feral/sour animal against sweet balsam was seen as a radical departure from the gentle single note flower waters and the zesty citrus/herbal colognes popular at that time. Women initially rejected this scent feeling it was too masculine. Guerlain's current version of Jicky has been softened by a dose of vanilla in the base and other changes. So if the story is true, from Jicky (1889) came Guerlain's masterpiece Shalimar(1925). Shalimar is said to be a love sonnet Jacques Guerlain composed for his young bride.

Jacques Guerlain increased the vanilla and added softness to re-create Jicky as Shalimar- a smoldering exotic but in keeping with the romantic feminine ideals of his day.

This is Guerlain's side of the story and even though Shalimar has been reformulated many times the essential form of Shalimar remains unchanged. If you are new to vintage perfumes, watch out for older or poorly decanted examples of Shalimar. It can age badly and when it does, ends up rancid and unwearable.

Emeraude's tale is less well know than Shalimar's perhaps but we do know that Coty began to create his perfumes around 1904 and Emeraude came out 4 years prior to Shalimar in 1921. By this time Coty had already composed a number of successful fragrances but Emeraude remains probably his most widely known, beloved and enduring creation.

So is Emeraude an entirely new type developed by the mind of Coty alone or did it begin as an inspired copy (directly or indirectly) of Guerlain's influential Jicky? Or is Shalimar just Guerlain's redux of Coty's latest sensation? Comparing the listed notes above verifies the two perfumes have in common the citrus top with a jasmine, rose heart, subtle spices and a base that features vanilla and benzoin. The differences arise from Shalimar's use of a tart bergamot/cedar at the top, the addition of prominent leather notes and the extravagant, sublime balsam/vanilla base (more smokey, incense tinged). Emeraude has ylang and rosewood. There is only a hint of leather or skin, and a base of patchouli, myrrh, amber and sandalwood added (more spicy, less smoky). Perhaps you begin to sense the perfumers witchery the many different sometimes archane ways to combine and layer seemingly disparate notes to invent similar feeling scents... 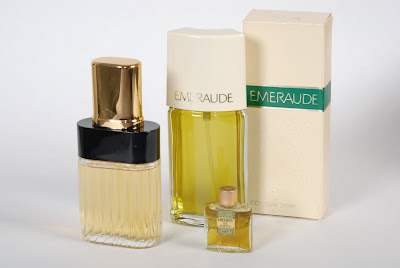 For reference my review is based on the perfume versions in the photograph above. The tiny bottle of Emeraude is a proper vintage version maybe around 1930-1940s. It was produced in Paris. I don't know the strength but it is called Emeraude de Coty. The Shalimar is a later eau de toilette. It comes in the bottle with vertical lines and black shoulders. I may be superstitious but I prefer Shalimar that comes in this bottle (was it the French version?). The larger bottle of Emeraude is a US 1960 - 1970s drug store version. Emeraude is extremely clean and pleasing at it's opening- lime, the ripe sweet fruit joined by the linden blossoms, with tiny hints of bell pepper and marmalade. Very soon the green begins to go cool and powdery as the first faint wintergreen/minty nuances appear. The iris/orris adds a violet/rose-lipstick facet; although sometimes I smell root beer instead at this stage (also a facet of the iris). The root beer/wintergreen aspect is what some people smell as a cola note. Inside of this lemon-lime soda smelling scent is tucked a clean almost soapy theme that gives the composition a more adult quality. The coolness creates a mist like sugar water mixed with absinthe. Creamy/nutty notes from the woods help to create an illusion- limes lingering upon the cleanest warmest skin, covered now in lace and powder, and lipstick but still so fresh from the bath that the odors of soap and toothpaste linger faintly in the air.

If Emeraude is the scent of a woman fresh from the shower, then Shalimar reveals that same woman later in the evening...
Shalimar is indeed somewhat shocking compared to the quietude that is Emeraude. In Shalimar everything has been amped up. The opening citrus blast is enough to peel lacquer! It's so potent that at first you suspect highly narcotic white flowers wait to ambush you but it all dissipates quickly to reveal a smoldering oriental rather than a killer flower bomb. Shalimar carries scent echos of the nightclubs of the roaring 20s... lingering smoke (and possibly you might catch the faintest traces of the sour, stale urine and worse because she had to step onto the dirty city streets) but this bombshell has returned home safe and sound. A hint of sweet lime still hovers about her delicate skin but it's mixed with tangy sweat. She is in the library now, with a warm fire. The scent of the leather furniture surrounds her, mingles with her scent - why, she is eating...vanilla ice cream! Now you are not sure if this woman is a femme fatal or a mostly innocent woman-child... I confess to prefer Shalimar to Emeraude. Yes, the tiny puffs of sour/ugly in Shalimar actually saves it from being too sweet and plainly pretty. The sourness disappears on my skin however this scent is one that really does smell differently depending on it's age, formula, your skin - everything seems to affect it. Usually you can tell after a few tries if Shalimar is going to work it's magic for you. But if it tends to go sour on you, then perhaps Emeraude will suit you better. With me, it goes too far the opposite way and develops the same too-sweet root beer note as Tabu can. While Shalimar is still produced and easy to find you have to search a little harder for Emeraude. In the US it can still be found pretty easily at several online perfume e-tailors and of course, on Ebay... but I always encourage you to get out and take a look around your town. And be sure to let me know what you think of what you find;)
Posted by Amelia at 7:18 AM

What a great blog! I adore both these scents and am lucky enough to have them in vintage versions that smell remarkable. I have often thought about the similarities between the two, and you brilliantly put those similarities – and differences – into words.

Thanks moi and welcome! You are so lucky to own both of these in top vintage form.

The uncredite photo of Marilyn above is by Milton Greene. Wonderful blog!!!