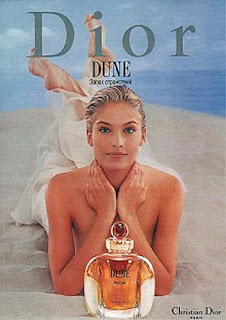 Unlike many of the scents that litter the floors and shelves of the 'vault, I can actually remember when Dune was released in 1991. At the time it seemed 'out of left field' for Dior- far from Poison and the decadent, increasingly dark images of fashion in the late 1980s. 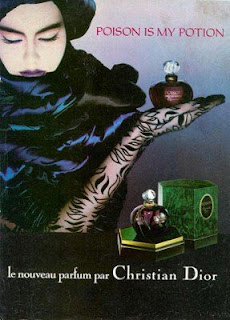 Looking back Dior was right on time. In fashion, the 1990s ushered in a new era embodied by the ideals of enlightenment and sleek minimalism; a quest for serenity. Dior was not the innovator in this new trend but an imitator, following on the heels of a relative new comer Calvin Klein.

Klein entered the fragrance arena with his super smash oriental fragrance Obsession in 1985; he followed up with the center of his fragrance empire, Eternity in 1988. Both of Klein's scents sold so well that his next scent was subject a huge advertising campaign- 1991's Escape. Escape was a supposedly "new" type of scent for women at the time featuring marine elements. But it wasn't kept such a secret and by the time advertising for Escape hit the streets in magazines and even on television, Christian Dior was right on his heels with his own scent which featured hints of marine notes and beachy grasses. It hit the shelves that same year in 1991. 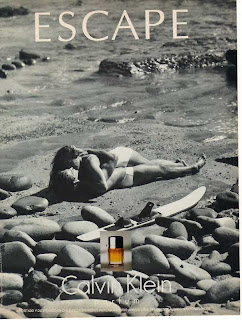 Scent-wise Dune and Escape are not very similar. Escape is the more marine of the two, a sweet rose that somehow has the harsh feel of salt water crashing onto the sandy shore.

Dune is much richer, more complex; it's a proper French perfume. It manages to feel sandy and sunny, breezy and beachy but without harsh synthetic edges. People fault Dune for it's strength and sillage. I can see why; the edt can ruin a perfectly nice day. But I was lucky enough to find the pure perfume. Dabbed rather sprayed on, it is completely different experience. The parfum sings with peony, aldehyde and woody notes lifted by lily, ylang-ylang and drenched in sandalwood, moss, vanilla and amber. You might not think of Dune as a good choice for January days but I'm in California after all and the radiant warmth close to the skin is quite lovely antidote for the cold, actually. 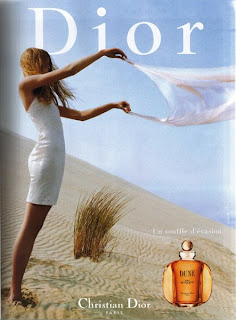 I would only buy DUNE in older and pure perfume form.

photographs from smellyblog, google images, perfume shrine.
Posted by Amelia at 9:05 AM