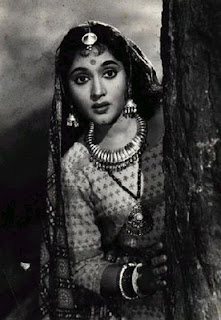 image: Indianvintage.blogspot
Soothing, meditative, cold/warm vetiver is a complex material rich in history and interest. Records of its trade exist from the 1500s. Vetiver is hardy and grows well in many places where introduced. It has been used for perfumery, woven goods and as a medicine since those times and likely well before. In 1809 the first chemical analysis of vetiver oil was accomplished in France using extracts of roots imported from the Indian Ocean island of Reunion. In 1843, a American vetiver perfume called Kus Kus was first produced in New Orleans, Louisiana. The vetiver used for it was almost certainly locally grown from an earlier-recorded 1803 purchase of vetiver plants from the perfume-loving French. All of this lore is according to American vetiver expert Mark Dafforn. 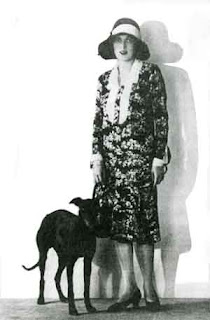 Wild child of the 1920s and inventor of the modern bra Caresse Crosby with her whippet hound, Narcisse Noir.
Photo taken in 1924.
image: theesotericcuriosa.blogspot
We see vetiver in many of the early great classic 20th century women's perfumes including Caron's 1911 Narcisse Noir. Since the 1920s we've seen a cavalcade of notable vetiver based perfumes including Corday's Toujours Moi and Chanels' own No 5, both released 1921. 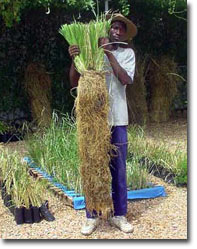 Roots of the vetiver plant after only 6 months cultivation show why it is so important to soil retention and useful for land conservation/cultivation.
image: permaculture.org

Vetiver is one of those rare natural materials that forms a whole perfume all by itself. Some of its evocatively named chemical constituents give clues as to its varied complex nature: clovene, amorphine, aromadendrine, junipene, and vetivone. The scent of vetiver is described chemically as ranging from sweetly roseate to saffron spicy, from peppery woody to balsamic. Vetiver is of such an important material to perfumery, that along with rose and cedar it is classed as "indispensable". In fact industry experts say that vetiver is a key component in about 40% of all perfumes produced today. It's been around for a long, long time, too; the use of it's oil in perfumery predates that of rose.

Vetiver harvester...
image: outdoors.webshots.com
Traditionally vetiver is considered as India's great contribution to perfumery. Highly viscous, slow to evaporate and with a distinct, pleasant odor there are few substances of equal utility or import. Haitian or Reunion vetiver is prized above all others for it's superior scent quality and it's sweet roseate note. Indian or Khus-Khus vetiver is renown for its balsamic woody notes. Like sandalwood, the world-wide supply of vetiver is precious and precarious. Indonesian and Chinese vetiver have begun to come into use in modern perfumery although these sources are not nearly as prized as Indian or Haitian.  As long as satisfactory synthetic substitutes are lacking, we will remain dependent on the naturally distilled oil. Haiti has long been the most important world wide source of high quality vetiver oil for perfumery. The recent earthquake there will likely have a devastating impact on supplies for many years to come. 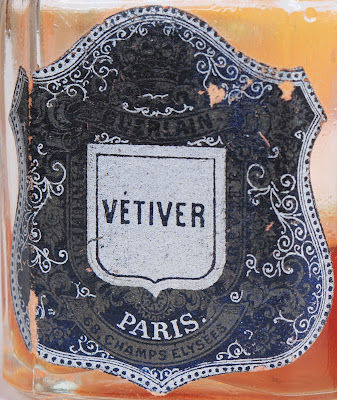 This is an up-close view of Guerlain's Vetiver acien label from my own photo.
Winter is the perfect time to wear vetiver so I'm back to give Guerlain's enigmatic Vetiver ancien a proper review. I've added the term ancien to differentiate this perfume from Guerlain's modern Vetiver fragrances, the first of which was released as a mens fragrance circa 1956. But could it be a modern throw-back, something Guerlain released to commemorate some earlier time? As I mentioned in another post, the label is stamped water based paint or hand painted; it smears like crazy if it gets wet and the silvery paint lifts off easily so it sure seems old to me.

The bottle I already described in a previous post but the juice of vetiver deserves mention here. It is a rich golden orange, amber color and not 100% clear. A fine sediment settles and swirls up like a thin trail of smoke when the liquid is agitated. As far as its scent, the perfume opens with a strong odor of wood, Eucalyptus and pine, followed by hints of sweet, rich malty grain. Notes of wet brown leaves and pepper emerge, partly aromatic, partly moldering earth. Somewhere later lighter strains of citrusy green grass and green apples appear but these recede quickly once the whisper of burning leaves introduces itself and grows into a strong clear incense note. This is a nuzzley incense- it recalls cedar and sandalwood. Well rounded with the sweetness of dry wood and later a rooter saltier driftwood; the incense stage smolders on for several hours.

I suspect this Guerlain Vetiver could be as early as 1840s also; but certainly no later than 1890s, else-wise we'd probably have some other reports of an early Guerlain vetiver in existence and I've found none... Guerlain must have been proud to offer their own version of this exotic and prized perfume to French women, considering that the French-creole ladies in America may have been wearing their own version since 1843! 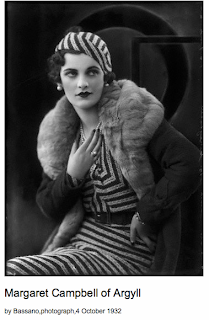 What I'd be wearing in winter with Guerlain's Vetiver... if I only could! Image from Model's Own blog.
And now I have the extreme pleasure of wearing this anomaly of a vintage perfume in my own lovely winter world- amazing.

But it really only matters if other people know about it, too.

Sadly I only have enough of this Guerlain vetiver to parse out three or four 1 mls samples. Please let me know in comments of you'd like to be considered- but this isn't a contest or give-away since preference will be given to bloggers and serious Guerlain fanatics, and those who read and/or blog/post about perfumes regularly, and because I want to see more reviews and opinions about this... Like I said, leave a comment, or email me at millascent@gmail.com. I'll close the offer as soon as 3 or 4 of you speak up for what's available.

What an amazing find! And how lovely of you to share the experience, too. The perfume community is really quite lovely. I can't wait to read the other impressions. I wish my blog were more established so I could sniff and review!

Wow, thanks so much for taking the time to pull this together. It was particularly interesting to me, as I am an avid gardener, too, and therefore enjoyed the history from a plant point of view as well as simply a perfume material.

Vetiver is one of those notes I had to learn to love. Was not sure in the beginning if I even could. These days, it's funny to look back and imagine why not...but then, crossing over is like that, isn't it?

I am of course interested in trying some of the Guerlain; I would probably recall my own timeline of "getting to know vetiver" and my interest in vintage perfume in with whatever else I experienced from my "hit." Very kind of you to offer to share, with whomever ends up sampling. :)

jen: no need for established blogs, just a nose who'll sniff and tell! Email me an address so I can send you a vial and tell me your url so I can throw it up and we can visit;)

ScentSelf: You're in, just email me an address! I'll get the samples out this weekend.

I read your journey to vetiver past with interest...vetiver and oakmoss are stop you in the tracks beautiful just on their own as essential oils. I'm very curious what the perfumer's art has done with such raw materials over the decades. Anyhow, i was thinking 1ml might be too generous to share for those who want to huff and sample something so rare. .5ml is good enough says I! Apologies if this is a duplicate post..something odd happened as I hit post...

No problems on this side Cheryl, thanks for commenting. Oakmoss is a gorgeous thing, for sure. When I was reviewing Orloff's Nikki, a member of the Vivaudou family wrote to tell me about an old flacon of oakmoss his wife had inherited. It sounded heavenly... Anyhow, email me with your post address but don't look for replies until this weekend when I'll decant:)

Oh, this is lovely! I remember the vetiver fields in Haiti and I took them from the ground and smelled the roots and it was such a beautiful expeirience. I would keep vetiver roots inside the closet as it kills termites, they said. and it smelled so beautiful as well.

Ok~ please don't sacrifice too much....how do I email you? I'm not overly tech savvy... Cheryl

For all responding for the vetiver - I need your mailing address, so I can send it (a PO box is fine). Email: millascent@gmail.com.
Thanks!

Hello Amelia,
I really enjoy reading your blog. Just a small remark: when you talk about the "vetiver acien", referring to the old version of the perfume, you should spell it "ancien". That is how we say it in French. Keep up the good work,
Sincerely,

Yes Thomas- thanks so much! What a dork I am!

Great post. I had purchased the Benjamin's Khus Khus extract at Christmas and it arrived today. Thank you for the valuable info on vetiver.

Amanda: I hope it smells awesome, and I'll bet it does!

Well due to your generosity I have something of great complexity to smell. These samples are so unlike anything else out there. I guess they demand the art and beauty and carnality come through without a floral dimension. If a late summer field of baking grass could be distilled this could be it...with notes of baked sugar and baked apples and perhaps cinnamon and sun kissed skin. These are first impressions...

cheryl: thank you so much for coming back to give those scent impressions here! Great description of those first impressions- keep us posted!