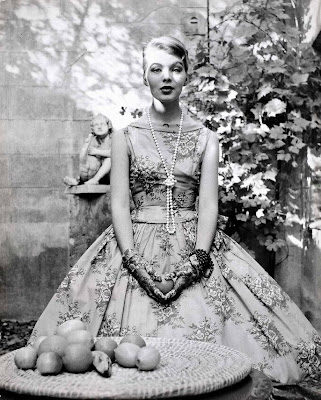 Herbert Tobias photograph of Nico Paeffgen wearing a cocktail dress by Heinz Oestergaard, 1956
Patrician House is the modern name for the much older cologne manufacturer Younger and Gebhardt. Originally located in Berlin in 1873, the company moved to Cologne Germany after WWII and took up the rather more generic sounding Patrizier-Haus. The Patrizier-Haus name begins to show up on perfumes starting in mid to late 1940s and continued appearing on fragrances throughout the 1950s and into the 1960s. Known primarily for traditional lavender based men's colognes, a number of women's perfumes were also released by PH. Their women's perfumes include Alita, Anonym, Corina, Filigram (Filigree) and Torero. The cologne line included Patrician Orange eau d'Cologne, Lavendel-Jasmin, Lavendel-Orangen, Patrizier Lavendel and Lavendel Tabac. 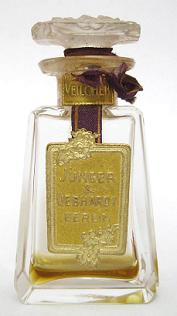 Junger & Gebhardt Berlin perfume bottle circa 1900s
Confusion abounds in researching the fragrances produced by Patrician House due both to the company name change and to the fact that many of the imported products bear Anglicized spelling. Products intended for domestic (German) sales and consumption were labeled under Patrizier-Haus-Koln. All hints of the earlier affiliation with Younger and Gebhardt name were dropped from the more modern releases sold under the 'Patrician House' label further muddling matters. Yet it appears that most of the perfumes and colognes imported into the US came directly from Germany into a single US distributor in Portland Oregon known as The Perfume House. The Perfume House is a well-known institution that has a long standing tradition around Portland, OR. Adding one more layer to the onion, The Perfume House was formerly also known as Tamak Inc; you find 'imported by Tamak Inc' stamped or printed somewhere on most of the vintage Patrician House fragrances that were sold in America.

Transition from Younger and Gebhardt to Patrician House- Lavender Orange
The perfume Alita deserves special mention due to a rather cryptic description of it that I found online. Affiliated with some now defunct (?) natural perfumery HealthPub blog that used the tag line: “The Age of the Foodie is passed. It is now the Age of the Scentie.", the mini review is most interesting:


"this rare rose perfume is made from enfleuraged rose oil that is aged 48 years...it does smell glorious. Let me know if anybody has ever heard of it. If after I evaluate it and if I find it really, really excellent quality rose I may use it in some of my perfumes. Never heard of Schiras (sic) rose before…." 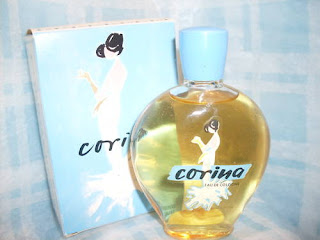 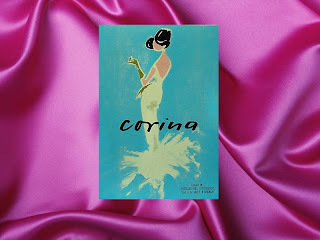 
"You can even smell the exclusive and very expensive Corina from Patrician House, which was introduced at the Seattle World's Fair in 1962 and is considered one of the greatest perfumes ever created..."

The rarest of the Patrician House perfumes may be Torero, which you can see below, but my bet is on perhaps the last release from Patrician House, Filigram (Filigree). Released in 1965, it's the one PH perfume I've never seen or heard referenced anywhere except for the briefest mention in the Perfume Intelligence library.

Thanks to Dimitri at Sorcery of Scent, you can see some wonderful examples from the artist whose work embellished the outer packaging of many Patrizier Haus fragrances. 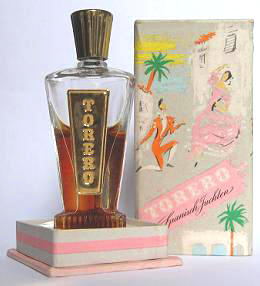 Formerly my own experience with Patrician House was limited to their Patrician Orange eau d'Cologne, which I'll be writing up soon enough as part of an upcoming Cologne week celebration.

I've seen a few bottles of the perfume Anonym around, which leads me to think it was probably one of PH's most popular perfumes. After smelling it I find myself enchanted and curious about the scent. This is the same perfume Dimitri found, which was given a one line description: ' an oriental style perfume'. 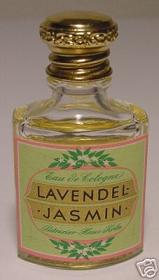 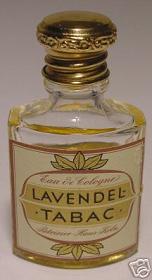 My bottle of Anonym was sealed. According to what I smell, Anonym is a decidedly floral perfume through and through. It opens with brightly sweet and familiar notes of narcissus and jasmine, yet I catch hints of something -- is it a trace of ambergris (?)- (there are other perfumes around the desk-top...) From skin, it appears to be based almost entirely with a tenacious and high quality rose oil (like Alita?) A faint and vaguely spicy rose is all that lingers on your skin long after all obvious traces of the scent have vanished. 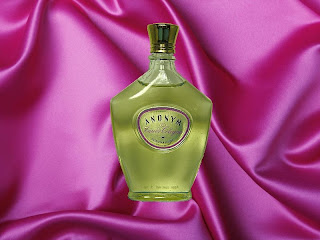 Patrizier Haus Anonym cologne
The box for my Anonym is a little plain- none of the pretty artwork you saw on the Torero box. Instead it is done in a dull gold tone bordered in shocking violet-pink and white touches (matches the label you see above). However, the bottle looks identical to the little Torero perfume- it has that same cute triangular shape with a brass screw-on style cap; it holds 1/5th ounce of pure perfume.  Whether you call it Patrician House or Patrizier-Haus, you really can't go wrong with one of these high quality vintage German fragrances. All the perfumes are highly collectible. I paid about $15 dollars for a 1/5th ounce, new-old-stock, boxed bottle- which comes out to about $2 per ml.

Unexpected, came here, from google friend connect Help. Thank you known many unknown things. Still I use cologne in hot weather adding few drops in cold water for bath. Can it be used like that ? Thank you for the spirit and sharing so cool. With Best Wishes.

Because of this blog post, I went out and bought Corina for all of $10.70. Making an offer is usually win-win, but you made me so curious about a cologne made for the Seattle's World's Fair (I live in Seattle myself). Corina starts off very powdery and has a lemon soap quality to it. In the middle it begins to smell like vintage 4711 with the oakmoss. Then it drys down to a very nice sandalwood musky thing. Not my fav cologne as I dislike powder but not bad overall.

ifinder- Thanks for commenting! I hope you stick around and find other interesting things to read and see here, too:)
Amelia

Colleen: Bravo to you for trying something new. Corina sounds like a summer scent- why not try it again in warmer weather and see how it performs then? I have developed a taste for older perfume styles but it is still especially true that some vintage perfumes require more than a few tries before revealing their full charm. So don't give up on Corina yet- you may find yourself growing to like, or even love, it.