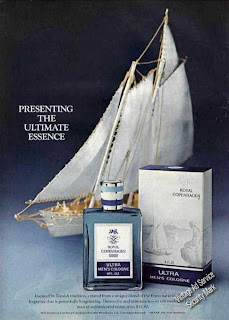 Can you believe this deliciousness was originally made just for men? Maybe so, if you take a look at this Royal Copenhagen porcelain figurine! The original Royal Copenhagen cologne is so yummy many women would enjoy not only smelling but wearing it. 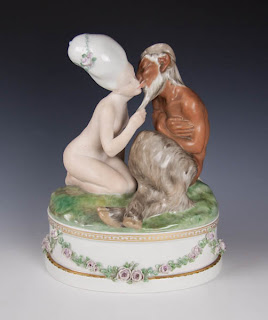 image: Royal Copenhagen Pan Kissing Maiden figurine box, circa 1930
from Shapiroauctioneers.com
Alas Royal Copenhagen was reformulated and the new version, has been out for years now. It is by most accounts a bitter, pale shadow of the original.  But if you like powdery scents with a kick of spice and a ton of attitude it's worth seeking this one out in original vintage form. It is a cologne so if you do try it, be sure to apply liberally. It also helps to splash a bit onto your scarf or blouse and allow it some time to develop before you judge it. On me it evolves first into a musky tobacco blossom scent and then dries down to a gently spiced and powdered leather. I only wish it were much stronger, in which case I might make comparisons to Habanita. 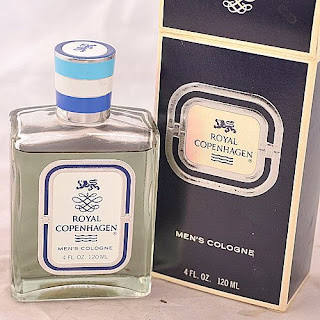 image of "original" Swank Royal Copenhagen, eurofinegifts at Ebay
The juice in my bottle has grayed with age and that's the color you want to see- avoid anything that looks bright blue. Despite its age, I can still pick out the citrus fruits, cardamom, aldehydes, carnation, cedar, musk, vanilla, amber, patchouli, tobacco and oakmoss notes. The original glass bottle version came with the cool tri-color aqua, white and royal blue metal sleeve over a plastic screw-on cap, topped with a white button bearing the image of a blue lion. There may also be a few examples of original Swank formula found in vintage solid silver tone bottles with silver tops as well. Look carefully as the newer glass bottles do not have the white button with the lion on top. 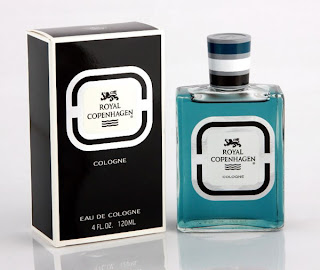 image: newer version, googled
Newer Royal Copenhagen cologne is often attributed to a maker of the same name, i.e., Royal Copenhagen. Only older bottles indicate RC as made by SWANK. Swank also distributed (and perhaps made?) the popular 1950s-1970s classics Jade East, Jade Gold, Jade East Coral and Jade East Golden Lime, any of which I've happened across have also smelled quite nicely. 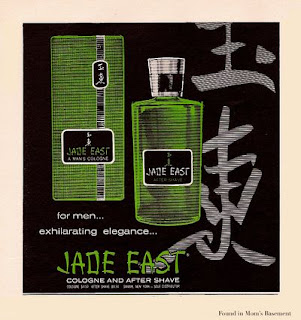 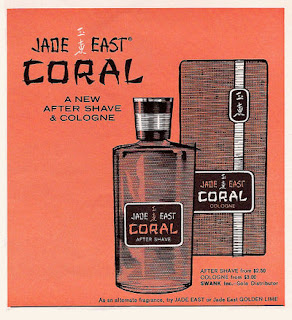 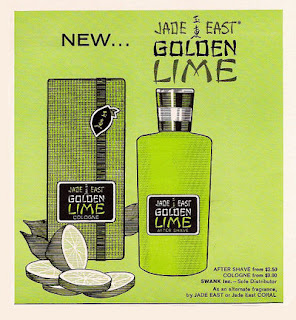 all images of Jade East colognes from Found in Mom's Basement
The Vintage Perfume Vault, where the scent of yesterday's vogue lives.
Posted by Amelia at 5:01 AM