A Story of Cuir de Russie... 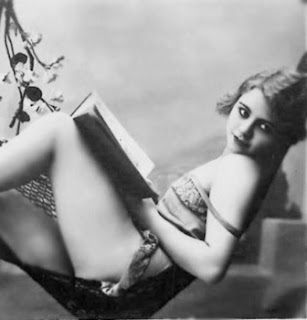 Well, as promised it's shaping up to be a very busy spring. I know it's May 1st and the official kick off of spring but for those of us here on the West Coast, spring has already sprung and we're getting set to kick off the summer season. I'm even putting my tomatos in the ground today tomorrow, a May 1st ritual that is in perfect keeping with my biozone. Many perfumistas will be wearing their favorite Lily of the Valley scent today; it's something of a tradition in Europe and especially in France to celebrate May Day by wearing sprigs of Lily of the Valley. But as usual I'm striking a counter-note and wearing a vintage Cuir de Russie perfume instead! 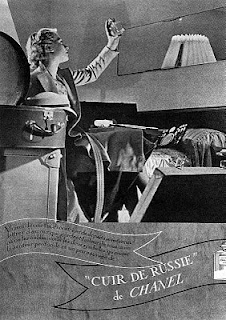 Cuir de Russie as a perfume style has been explored in depth by many perfumers. Several years ago there was a definitive blog entry on the subject by Bois de Jasmine. Regardless of the fact that there were numerous predecessors, Chanel produced what we consider the prototypical feminine version of Russian Leather perfume. Her version of Cuir de Russie was composed by Ernest Beaux and originally released in 1924. That perfume, much more so than the famous No. 5, captured Coco Chanel's true essence. Rich and compelling (and a little rustic), it is more an homage to the backbone of the woman who wears it than a celebration of her smartly tailored clothing, coiffed hair or painted face.

Guerlain (Amie, that is) actually is credited with one of the earliest Cuir de Russe. He did his in 1875- soon after taking the comany from his ailing father and several years before creating his opus Jicky (1889). Like Chypre, Cuir de Russe transended any singular perfume to become a broadly interpreted perfume type. Many prominent and not-so-prominent houses ended up offering a Cuir de Russe/Russie in their lines. As Russia turned from Czarist rule, years of imperialist tradition died. The motherland was seen less as a producer of luxury items and more for its political ideaology. It is not so surprising then that many, if not most modern era Cuir perfumes began to be called by other names.

Nevertheless, there are many worthy vintage Russian leather perfumes the collector may happen across. If you know my leanings (as far the scope of this blog), you will not be surprised that my Cuir de Russie of the day is rather more obscure than the famous Chanel version. This one was done by a French company that existed in Paris only from around 1936 until sometime in the 1950s (a guess) called the Scientifiques de Beaute Vonna, or more simply Vonna. Vonna was a minor player in the world of perfume even in its hayday with barely any written history (at least Web-wise) and no discernible history of advertising. In fact, that's why it is featured here. If someone else knows more about the history of Vonna perfumes, then let him (or her) speak and add to our story. 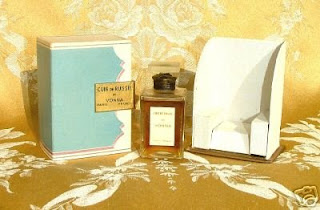 I obtained my boxed, sealed bottle of Cuir de Russie de Vonna from an online auction for very little $$. The packaging is very Art Deco, a slide from the top box with an inner throne formed of paste-board that reveals the front of the bottle upon opening. The outter box is done color block style, with a powder blue background with a white margin along the right hand side, suggesting the view revealed by pulling back a curtain.  The bottle is a plain rectangular prism with a matching flat-top frosted glass stopper. The label is austere, cream with plain gold lettering.

Purchasing something from a house you've never heard of before is a gamble. Essentiallly, any vintage purchase (if you're hoping to wear the perfume) is a gamble. The quality of preservation of the juice is unknown until you (or soemone you trust) has smelt it. But I like to take that chance for myself since I usually have great luck in finding and selecting beautifully preserved specimens. This find was no exception because despite it showing evidence of an earlier leak, the perfume inside the bottle remains beautifully preserved.

To be honest, I bought this one hoping that it would a be a faithful duplication of Chanel's CdR. I thought perhaps it was a reasonable assumption. Vonna seemed so obscure and the name so empty of signficance that it might only have existed, as so many houses do to reproduce thoughtless copies of already famous perfumes. But boy was that idea wrong. Instead of snagging something that smelled like anything else, I went down the poverbial rabbit hole and ended up exploring something totally unique. Without comparing it to anything, the Vonna CdR smells strongly of leather. But a side-by-side comparison of a 1930-40 era Chanel CdR (parfum also) reveals the Vonna is a much softer leather scent than the Beaux/Chanel version, making the Vonna seem like an almost suede-like, more modern rendition of leather. A side-by-side comaprison with modern suede perfumes (Serge Lutens Daim Blond and Indult's Reve en Cuir) confirms, this is indeed a softer and surprisingly supple and modern turn of leather. 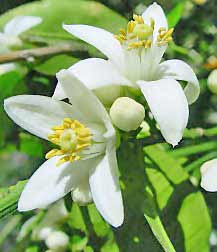 Vonna's Cuir De Russie opens fittingly with an over-dose of orange blossom. I say fitting because the fleshy orange blossom petals that fall from our orange trees this time of year have a naturally leathery, almost petrolish tone with an almost narcotic, honeysuckle-sweet nectar scent. Along with orange blossom, Vonna's leather seems to have been cured in a vat of violet petals (thanks to a heavy touch of ionones, no doubt). It dries down to an ultra-smooth, almost sweet tonka-suede nougat that maintains its leather character while becoming more and more powdery; you can detect on paper 24-48 hours and long beyond- it lasted as long as the Chanel extrait, although the far-dry down bases reveal even more the difference. All in all, Vonna a fantastic leather perfume for the vintage collector, if you can find it.

Perhaps one would need to travel back in time to be able to further pull back the curtain that shrouds Vonna. There is at least one related perfume I recall, a self-titled Vonna, from ~1936. On a label affixed to the Vonna Cuir de Russie bottle is a badge that reads Produits de Scientifique de Beaute de Vonna, Cachet de Garantie. History tells us that in 1926 the very similarly named Academie Scientifique de Beaute was born in Paris. The company (still family owned to this day) was founded by the French pharamcist Georges Gay, and they claim to have opened the first scientific beauty academy to train aestheticians in 1928. Many of those who were trained at the Academie went on to work with the great beauties of the day who worked in the growing film industry. While there is no direct evdience of the Academie making perfumes, one wonders was Vonna one of the institutes earliest graduates? Did she perhaps branch out into perfumes and possibly add cache to her own name by affiliating it with the Scientifique de Beaute title? The timing and place are certainly right, if not the conclusion...

image of vintage girl (despite my google avatar, she is my [vintage] doppleganger), from moregrittyv677202.blogspot
image of Vonna Cuir de Russie from Worthpoint auction house
image of vintage Chanel Cuir De Russie ad http://indya.over-blog.com/
imaeg of orange blossom from desertsonlight.com
image from Academie Scientifique de Beaute, implied to be Georges Gay 1926
Posted by Amelia at 1:47 PM