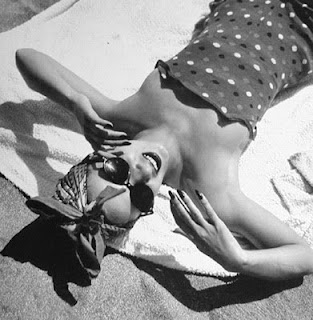 Abano is one of the stealthy classics of vintage perfumery; it also happens to be one of my personal favorite scents. This Prince Matchabelli creation is ardently loved by its fans, who hold its secrets close. You will scarcely hear tell of Abano, yet if you check out some completed auction listings, you will see how much people are willing to pay for the pleasure of it. 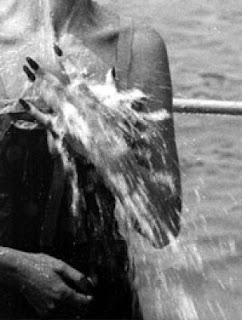 What makes this scent so special? Part fragrance, part treatment, it was the first of the modern day "spa scents"; Clarins Eau Dynamisante and Lancome Aroma Tonic are two more recent examples of the type. But Abano was done in the old school tradition; it's more of a prototype. Released in 1931 (other sources: 1934), Abano was one of Prince Matchabelli's earliest scents. The Prince was in fact an amateur chemist, and there are some who believe he had a hand in formulating at least some of the early scents. 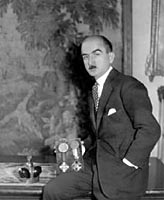 Guéorgui Vassilievitch Matchabelli (1885-1935)
The packaging for Abano features a Greco-Roman style mosaic of a seahorse wearing a crown, reinforcing the Grecian spa associations. There is a little blurb of information about Abano which appears, more or less as a direct quote, almost everywhere it's mentioned on the Internet. But you won't find much else written about it: 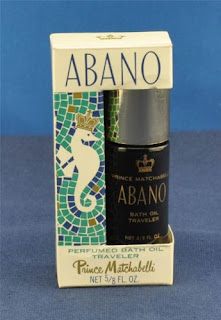 "Launched by Prince Matchabelli in 1931, now discontinued. Advertising slogan: "Abandon Your Cares to Abano." Named for the famous rejuvenation spa at Abano Terme, Italy. Made of a stress relieving blend of oakmoss, orange, patchouli, lavender, herbs and grasses." 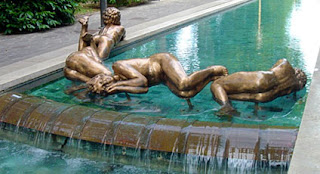 travelitaly.com
Abano is named after the ancient sea-side community (now resort, town) in Northern Italy; for centuries people have traveled to Abano seeking out it's natural hot springs and healing mud baths. 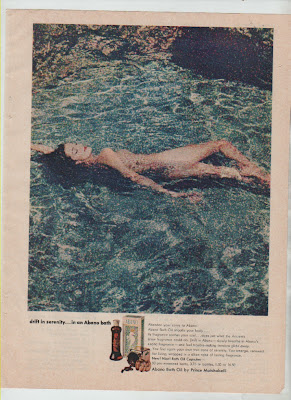 The print advertising for Abano feature a photograph of a beautiful, serene woman swimming naked through crystal blue waters and the following text:


Drift in serenity ABANO bath oil smooths your body. It's fragrance soothes your soul. Does just what the ancients knew fragrance could do. Drift in ABANO. Slowly breathe in Abano's exotic fragrance and feel trouble-making tensions drift away. You find again your own true core of serenity. You emerge renewed for living wrapped in a silken robe of lasting fragrance.

Whenever it's offered for sale today Abano typically commands premium prices. There are two versions of Abano, one the bath oil and the other, perfume or sometimes a 'Cologne Parfumee' version. The perfume also comes in a Cologne Spray Mist and an After Bath Cologne. 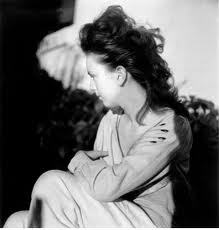 If you are seeking Abano perfume, there is an Abano knock-off advertised online... If you've been curious about it or have been looking for a replacement scent, then this might be just the thing for you. I can't vouch for the quality of this pretender but once I exhaust my current supply for the vintage, and if I don't hear anything negative in the meantime, I just may give it a go.  However, I can't help wondering if this new juice has snuck it's way into any vintage bottles? 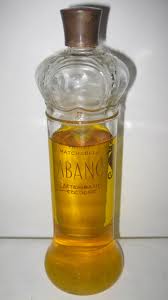 Quirky Finds
Most of the Abano that I see is the bath oil variety. It was widely available and sold well for many years, often in this column style bottle shown above. The bath oil seems to have a touch more animal characteristics, spice and bite compared to the cologne, which is sweeter with more orange and drier grass notes. But both smell intoxicating, breezy, and recall the feeling of being on a Mediterranean coast line. Or in my case, it's actually the Northern California coast line which is very similar to the Mediterranean. The bath oil ages from yellow to a deep coffee or cola color while the scent remains sweet and fresh. 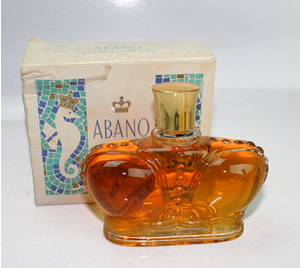 The older perfumes I've seen are colored in the same way as the oil but the Cologne Parfumee tends to turn deeper and deeper shades of orange. The crown bottles like this one above (from Aunt Judy's Attic) usually contain the perfume or Cologne Parfumee. Another bottle style from the 1960s-1970s, shown below, holds the Cologne Spray Mist: 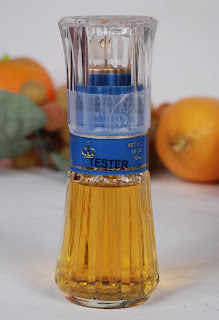 The plastic lids on this bottle often come up cracked or missing pieces and mine is no exception, so it's been taped up. On the reverse side of the periwinkle label reads: Prince Matchabelli ABANO Cologne Spray Mist. This is a 1.8 fluid ounce size. It is not refillable. 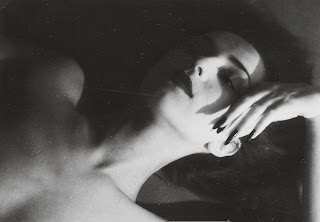 Back to the scent.That blend of oakmoss, orange, patchouli, lavender, herbs and grasses contains a special balance of benefits. It shares with many lavender based scents, an ability to stimulate the body while calming the mind. Many men and some women find the scent has an arousing effect as well. The orange enlivens and brings feelings of renewal and joy, the oakmoss and patchouli center the psyche, while herbs and grasses sweeten and fix the base. This quote from starchild,com describes the 'magical' benefits of oakmoss:


...grounding and sensual in an earthy sort of way. It enhances sensitivity and awareness and may be used by those who wish to listen to the nature spirits and the voice of Mother Earth... 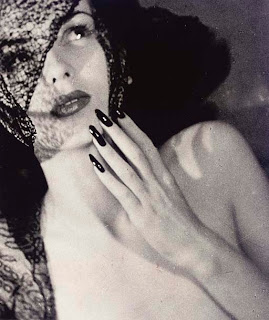 Abano has been compared to other potent scented oils - Youth Dew and Weil's Bath oil scent Secret de Venus. However Abano has a much more rustic, aromatic and refreshing feeling to it than either of those heavier, oriental feeling scents. I think of it as a forerunner not only to the many spa and treatment scents we find today but also the hugely popular category of clean, oceanic scents. Calvin Klein's Eternity, similarly groundbreaking in it's own time creates the same clean, serene feeling of existing in wide open spaces as Abano. As Abano dries down, the spices, citrus and musky trace clings to your skin like a veil. 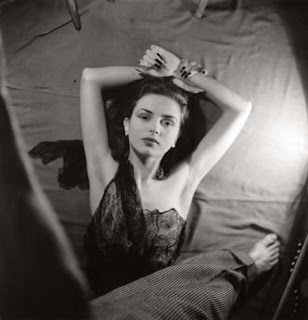 The model in all of the black and white photographs is Florette Lartigue. The photographs are circa 1940s taken by Henri Lartigue (her husband at the time). 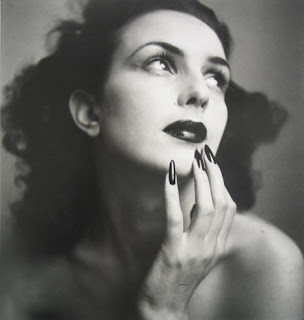 I wonder if you recognize Florette Lartigue? She is my Google ID avatar; for some reason I have always felt deeply connected to her images. I know you must tire of my vintage perfume assignations, which perfume goes with which beauty... but I know beyond a shadow of a doubt that Florette wore Abano. Daring yet joyful, unisex yet uber-sexy, earthy yet delicate, Abano matches her laughing eyes, dashing modern spirit, lilting grace and tough, sarcastic side like nothing else could.

The Vintage Perfume Vault, where the scent of yesterday's vogue lives...
Posted by Amelia at 6:50 AM

What a wonderful article. Thank you.

Now, I am going to have to shake you.

AUGH! I want to smell this!! I made it all the way through the post with the help of the "what happens at auction" knowledge. I have no means to compete with those high rolling bidders, so I relaxed, sat back, and listened to the (very interesting, again thank you) tale of Abano.

Then you got to the notes. Rats. That, in the old style? Aw, I at least want a chance at two hits on the stuff.

Which is why I kiddingly said I want to shake you. I don't. I *do* want to shake your hand at yet another happy contribution to my perfume awareness, and another example of how my visits here are always rewarded. But...could you maybe pass a tissue? I think I have a few tears in this one eye... :)

Scentself: Aw, shucks. Now I feel like a major enabler. But this is definitely one to keep a look out for in thrift shops and antique malls, even flea markets and garage sales. It sold like hot cakes for like 30 years, so there's still plenty of it out there waiting to be found. I found mine in a high volume thrift shop, and the time before that at a booth in a street fair.

Good luck if you do go hunting and thanks for the kind feedback!!