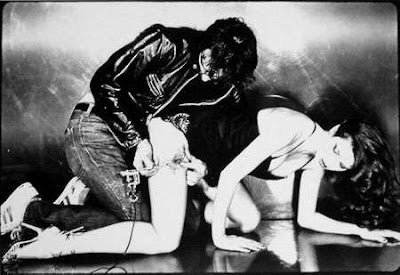 Chris von Wangenheim (1942-1981)
EDIT: Bijan is a funny company- founded in 1987-ish, it is one that none of the usual suspects- Fragrantica Basenotes nor Perfune Intelligence, have well documented all of the various releases. So it appears that there may have been a pair of scents released in the mysterious "b" bottle I mentioned in this post originally- one for men, one for women. I believe this is the case, since I've had two 'b' bijan bottles, one distinctly masculine and one more ambery, oriental and complex- a feminine version or entirely distinct scent- called: 100% Bijan.

If you read far enough into the Bijan threads on Basenotes, the guys do describe such a 'b' bottle containing a masculine scent but in the post referred to it as 'Bijan 1981'- and then I see an entirely different bottle on Ebay, definitely one of the 1981 releases by Bijan for Men. But it comes with a swirled turban looking cap, and a fat round bottle (and looks quite feminine). So it's really kinda confusing. But here's a photo of that mysterious 'b' bottle, and so now you know. BTW: The bottle in the photo is EDP, whereas mine is EDT and the EDP was not made by 5 Star Fragrances , like mine. Can't say how it smells, though from text, it sounds similar and the juice color is right. An d now I can smell the tuberose, vanilla, rose etc... Still delicious, but guess I'm just not as manly as I thought! 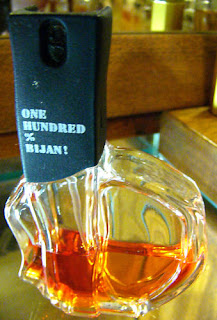 Original Post:
It's raining cats and dogs this morning!  My scent of the day: I'm wearing the enigmatic, complex and controversial (does it or doesn't it?) Bijan for Men 1981. If you're not sure which Bijan this is- it's the one in the funny bottle- no, not the one(s) that look like a doughnut! It came in a bottle that looks sort of like the letter 'b'. I've had two bottles of Bijan for Men, both in the same bottle and both made by Five Star Fragrances but they smelled totally different. The first, fougere and tangy but this Bijan is more like it- for me anyway. It is robust, resinous, amber, patchouli, leather and waves of that well known barnyard lurking about, occasionally emerging from the cloud of incense and hints of other bits floating past like so much confetti after a parade. To me it smells wild and oriental like a midnight taxi ride through Chinatown, SF- circa 1981...
The Vintage Perfume Vault, where the scent of yesterday's vogue lives.
Posted by Amelia at 5:57 AM