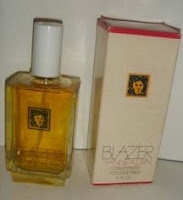 Blazer by Anne Klein is in a select group of largely unsung classics of modern American perfumery; it's just under the mainstream radar but it has many fans and genuine bottles always sell quickly, when you can find it, usually at online e-tailors and EBay.
Much like its namesake, American fashion designer Anne Klein, Blazer came and was gone off the scene much too quickly. Her name and timeless design appeal continue on- you may sense or even remember when Donna Karan took over Anne Klein, after AK died from breast cancer in 1974, very young, at age 50 and certainly near the height of her power- proven by the popularity of her work as a designer and her enduring name-brand. 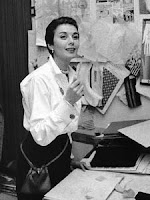 My life was much too humble and my style too home-grown to have any need for her Young Sophisticates line of clothing as a young girl growing up in the late 1970's. But despite my lack of a 'decent' wardrobe, I recognized Anne Klein. Originally born Hannah Golofski in the 1920's, she excelled in fashion from an early age and won several Coty awards as a young woman designer. Perhaps from her Coty connection she learned her good taste in perfumes? In any case, her three perfumes (Anne Klein I, Anne Klein II and Blazer) were all very well done and each one still has many fans. Although Helena Rubistein died almost a decade earlier (in 1965 at the age of 94!), her company had produced many perfumes from the 1930's into the 1970's and Rubinstein's company bought Blazer in or near 1974. The newer HR bottle is rounder instead of the sharp rectangular lines of the original AK version & the AK lion logo is gone. The newer HR version is simply called BLAZER. My impression is the scent is the same (but there is a price difference) and I've not sniffed the HR directly. 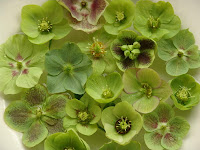 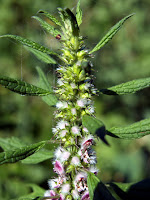 But BLAZER by ANNE KLEIN is a most divine green aromatic that represents an almost ideal scent. It is clean and streamlined and seems perfectly balanced, more than any other of its type that I could compare it to. As a starting point I would reference Clinique Aromatics although Clinique's fragrance is not as smooth and has a sweeter heavier patchouli base. Y (YSL), is another famous green from the 1970's that is almost the polar opposite of Blazer. If Y is green silk, Blazer is green tweed. As far as notes, not many are listed. But we know the top fragrance notes are juniper, bergamot and lavender- in addition, I smell lemon verbena, mint, clove, and especially in the base, patchouli, cedar and perhaps ambergris. The flowers are restrained and green. To my nose, geranium and marigold stand out. However, a Nell Butler copy for Chanel 22 mentions Blazer as "a clean, crispy scent with the soapiness and whiteness of Chanel 22, but pared down and less flowery." I concur it is pared down. Huge chunks of Chanel 22 - incense/leather against aldehydes, rose and iris, the sweet musky drydown have been subtracted from Blazer. What is left smells naturally clean and brisk. Blazer starts out like a tonic, juniper lavender and bergamot give it a crisp herbal and soapy start- which is followed by the clean green/white floral & spice heart. The finish is lightly green and woody.

I love Blazer; it is less mainstream but represents the same idea and time in American perfume as Charlie. Both came out just after the American feminist movement and the free love/sexual revolution. Anne Klein's streamlined tailored sensibility was not traditionally feminine and Blazer was a fairly masculine smelling perfume that fit her style clothing. Today we see a strong unisex trend in the area of fashion and especially marketing perfume as unisex, although all personal grooming habits, including piercing, tatoos, hairstyles, make-up and scent are being marketed this way more and more. Blazer was an early example of what we now are told is the older concept - fragrances that are genderless. Some compare Blazer to Charlie, a mass marketed 70's mega-hit scent with gender play in mind, but I have never been able to wear that one. Blazer is easy to wear and still smells amazingly modern to me, making it a gem of 1970's perfumery; its balance of green masculine and white feminine notes would be appropriate for work or casual day wear today, as it was 40 years ago.
Posted by Amelia at 8:23 PM

This is a fantastic website you have here. The online community will greatly benefit from your efforts. Please when you have time do check out my site for insights on Perfume Cologne and how to get discount perfume gifts sets for less.