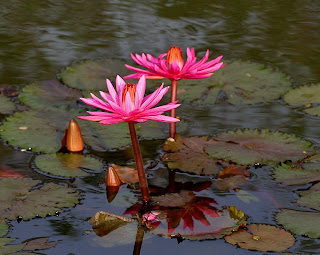 Jean-Jacques Diener trained in Grasse as a perfumer; he worked at Givaudan during the 1970-1990s and is perhaps most famous for composing Must de Cartier in 1981. Cafe is another oriental scent he composed, less pricey and not as well known, it was released just a few years before Must. But my interest for today is his 1998 release, Jacqueline. Made by Z Parfums International (Hauppauge N. Y.), it is discontinued and already becoming a rare fragrance. However a few bottles of the edp can still be found online. I'm not sure how widely this perfume was distributed or promoted, even in it's heyday. I've only seen a few of the older carded samples, which bear an older photograph of Jacqueline Kennedy with her then two young sons. I don't know the story or the association between the lady and the fragrance (but please comment if you do). Jacqueline is an oriental fragrance. According to the promotional card, the top notes are white rose, Lily of the Valley, Chinese Orchid and Indian Waterlily.  The "soul" of the fragrance is Brazilian Amber, Mysore Sandalwood, Tahitian Vetiver and a touch of Fijian Vanilla and thyme. And its "heart & soul" is comopsed of musks, patchouli flower and cedarwood. I have the pure perfume version. My first impression is of something simultaneously spicy, herbal, dry and sweet, mainly due to the effects of the powdery cocoa tinged patchouli flowers, mingling with the white rose, waterlily and thyme. The amber provides a smoothness and richness that is immediately apparent as well. The florals do not read sharp or even particularly white to me, instead they lend an exotic impression of flowers whose petals have a succulent melon-like quality. Jacqueline is done in nearly an 80s power style with all of the polish of a big department store release. But as it settles, it rapidly becomes more intimate, softer and more powdery, and at least in the perfume form, wears long and close. The scents that emerge are of skin allowed to glow, but not quite sweat. The sandalwood comes through more and more to accompany the resinous and slightly herbal qualities, which with the amber gives the scent the character of a veil. I imagine this one could become someone's signature scent, a perfume that lingers on things and would associate itself to someone easily. 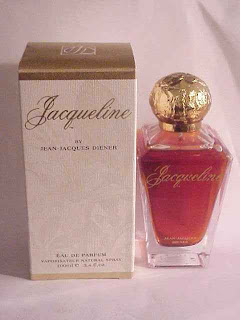 The Vintage Perfume Vault, where the scent of yesterday's vogue lives.
Posted by Amelia at 2:21 PM