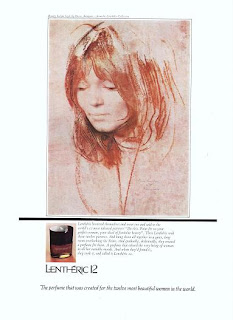 Lentheric 12 was released  around 1965 and discontinued probably by about 1975. Those dates from my own research. Perfume Intelligence only gives a release date of 1956.

The Lentheric story has been told here before but for those whose memory is short: Guillaume Lenthéric established his perfume salon at Saint-Honoré in Paris, 1875. Although he began his career as a hairdresser, over time Lenthéric expanded into millinery accessories and perfume. Originally he only made up fragrances for some of his most valued customers but when Lentheric's perfumes began to draw even more attention than his lofty coifs, Parfums Lentheric was created. Despite his death in 1912, Parfums Lentheric lived on and approximately 140 fragrances were released from the house between the years of 1910 to 1964. You can see an alternative and more detailed history here (quoted below):


Lentheric is an old company which was established in 1795 as a millinery. In the 19th century, fashion accessories were added to the store. From 1873, perfumes were being informally blended in the store for sale and originally made fragrances only on request to his customers. Guillame Lentheric, a hairdresser, established the perfume-cosmetics company La Parfumerie des Orchidees in 1875 . A large building at 245 rue du Faubourg-Saint Honore in Paris was acquired in 1885 and turned into a salon for millinery, perfumes, cosmetics and important beauty-hairdressing. By 1900, branches were opened in Deauville, Monte Carlo, Nice, Baden-Baden, and London. In 1910, the company was acquired by Velsch & Holtz. Later acquired in 1965 by the British American Tobacco group. From 1910-1965, Lentheric managed to produce around 140 fragrances. The company was then sold to Smith Kline Beecham pharmaceuticals in 1985, merged with Yardley in 1993; the name was licensed to International Brands in 1994.

The bottle you see in the ad appears to one used be circa 1940s to as late as1960s, but it looks so old fashioned that I wonder if the 1956 date for this perfume is more correct? 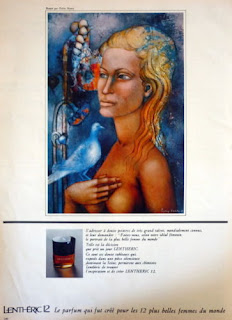 Ad from Vogue 1967
But in any case our story really begins in 1965, when Lentheric was acquired by the British American Tobacco group (BAT)... Lentheric 12 is distinguished as being one of the earliest 'modern' Lentheric perfumes - those released after BAT acquired the company.

"Back in the 1960's and 1970's BAT owned several perfume and fragrance houses. One, Lentheric, wanted a perfume that would "appeal to women everywhere". So they went to 12 of the world's best-known painters and commissioned them to paint their ideal of feminine beauty. Some of the painters include(d) Pietro Annigoni, Peter Blake, Padamsee, Ruskin Spear, Robert Ladou and William Dargie." 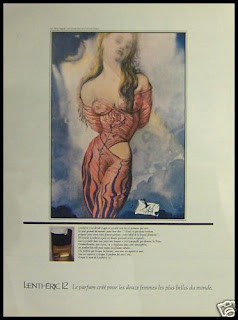 The author then adds: " Of course me being a Salvador Dali fan, I think his is by far the best. Oh and guess what, the imaginative and savvy marketing people called the new perfume; Lentheric 12. Sounds more like something I'd take for a cold. All of the above is quoted from an "On the road in London" piece published in the CorporateTrivia .com archives. Gee, it sounds more like a perfume to me- oh well, I suppose the author never heard of No. 5, No. 19 or No. 22, either. The advertising for Lentheric 12 was somewhat innovative as well. The ads for the scent all featured 'winning' artworks submitted from the 12 artists; each contributed an image of the idyllic woman for whom '12' was created.... But make no mistake, this perfume was created for a fully-formed Eve of a woman, not some girl-child archetype. The scent smells wonderfully complex: spicy and smooth; dry, bitter and sweet; of bread and of fur; herbal, grassy and resinous. 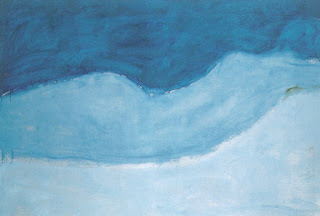 The artful campaign has fed all sorts of flowery language into my head- like bits of a melody that tells of forgotten journeys through rose and violet scented arbors; of days spent rambling around overgrown orange tree groves; of nights spent strolling down green paths lined with vetiver, patchouli, and oakmoss; of the golden sheen of a child's hair, and its innocent musk; the sweetness of castroeum; and somewhere, tarragon and basil scented bread baking over lumps of amber, on a bed of smoldering sandalwood...

While the soul of the juice remains intact, the scent has drifted into something of an upside-down ghost. However much it has been effected by age, its beauty is still quite apparent.

Lentheric 12 reflects the influence of those great creations of the late 1940s through 1950s. It comes from a time when companies cared enough to compete with each other to bring only the best releases to market. '12' seems to me like a hybrid of the Dior style of chypre and of Lancome's silky orientals, especially. It also reminds me quite a bit of an earlier, similarly complex and mysterious perfume: Shocking by Schiaparelli. It is also reminiscent for me of Polly Bergen's overlooked 1970s creation, Tortue. 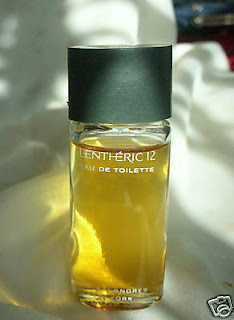 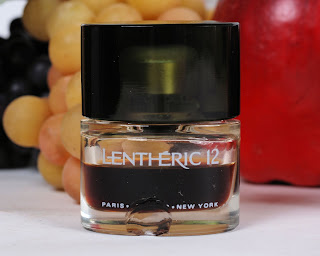 Lentheric '12' is often referred to as being an edt but it also came in the pure perfume form, in a beautiful crystal topped flacon. The lid for all of the '12' presentations I've seen is always gray, be it crystal or plastic. On the perfume, the lid is heavy smoked crystal with a ground neck recess, under which fits a brass and plastic screw top, covering a dome shaped dauber-top. Mine has a large chip right at the base, which spoils its handsome looks a bit. The perfume juice I've seen have all aged into deep red-brown. 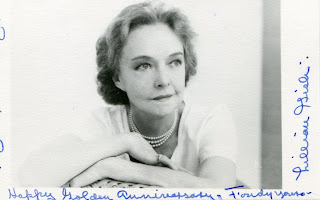 As an aside: the first whiff of many vintage perfumes can be deceiving. It often happens that the top notes evaporate in greater proportion to the rest of the composition, leaving more of the heavier heart and base notes behind. An imbalance occurs, and the scent shifts towards the lower register. Yet sometimes, most of the top notes are still present, albeit in smaller amounts. Over time, you begin to detect many top notes that at first seemed to be lacking. After you smell newer and older examples of familiar perfumes, you begin to note certain patterns in how aging tends to change perfumes, and your brain seems to begin to be able to pull the threads together, to fill in those missing parts. It's like seeing the older woman and picturing the younger woman in your mind... 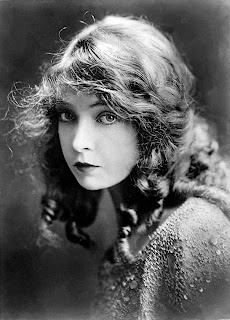 After doing some research, I've located a couple of more modern examples of '12'... and no doubt they might be in 'better shape' and could perhaps reveal more about how '12' smelled when it was 'young'. But for some reason, I see no need to seek them out.

Oh, and if any of you are wondering what the Lentheric of today is like, I can tell you the rest of that story, too:

After BAT, Smith Kline Beecham pharmaceuticals, Yardley and others took turns owning and using the Lentheric name to promote various bath and beauty products. In 1998 Lenthéric re-emerged as a modern perfume house although their current offerings range from the low brow offerings- 'Junkie', which looks like an 'Axe' knock-off, to their 'Hoity-Toity' line, which looks like it was designed with hyper-active, over-medicated 'tweens in mind. Needless to say, for a retrophile like myself, the Lentheric of today leaves much to be desired when held up against the quality offerings of their past! 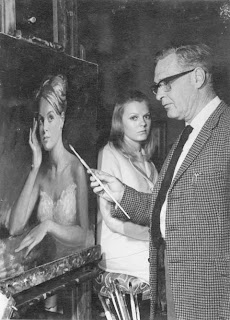 Photograph of the Lentheric study 1963. According to the captionist,William Dargie won the worldwide painting competition held by Lentheric for the launch of their new perfume ‘Lentheric 12’. Have you seen his version of the ad? The portrait is of his daughter Faye, who was fifteen at the time.

I must apologize for the use of these photographs- most credits are lost!
Many ads are from Ebay and I can't recall where I found the archival material...
Lillian Gish photos from Google images search
Posted by Amelia at 12:35 PM

Is the perfume you have wearable or is it old and good only for the reference?