You can't read the text here, but it's my own photo of a copy of an old 1965 advertisement from the Vista, California newspaper. That's not too far from where I sit now, come to think of it. Since you don't have the eyes of an eagle, here is a close up of some of the ad below- 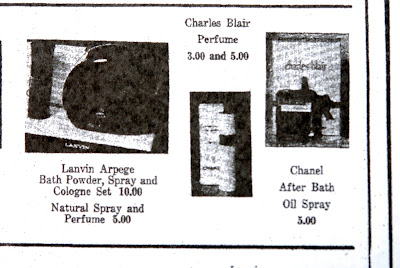 Charles Blair Parfum, or Charles Blair Perfume, as we would say here, is the obscure vintage scent pictured between the Lanvin and the Chanel. Being a largely unknown scent, it would not necessarily be worth mentioning here were not for its unique quality. Made available in America for the first time in 1962, it was said to be an older French perfume formula, an exotic blend of woodsy and mossy notes as well as Eastern Indian sandalwood. Supposedly rediscovered by American tourists in Europe twenty years later, it was first made in 1934 or 1935. According to this ad, Charles Blair was priced on par with Lanvin and Chanel perfumes, making it a little more costly than Faberge, Coty, D'Orsay and Corday, while Dana's Tabu was even cheaper- the true bargin of the bunch, it sold for only $1.50. And below you see the humble, even ugly, little miniature bottle that introduced me to how this creation of Charles Blair smells: 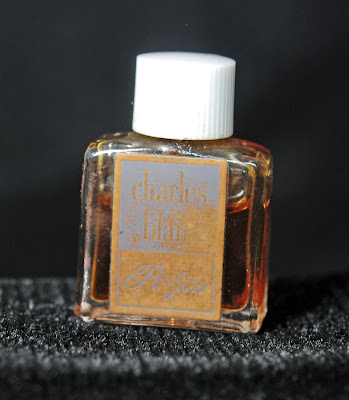 Fortunately, the contents are superior to the packaging. The label of yellowed cream with gray over the top, shows the ravages of time. So much so is it aged that I question whether this is the 1962 version, or possibly the rumoured earlier 1930s one... In fact, in one small photo I found, the 1965 bottle of Charles Blair perfume featured a black and red label, while this little bottle has this possibly older style. I can't say for sure if this is the older or newer version of Charles Blair Parfum.

But either way, the scent in this little bottle has completely captivated me. Soft and creamy on the one hand, cool and mentholated on the other, and beneath, there is a warm bread note, yeasty but sweet, as if a fresh loaf had been drizzled with honey and dipped in stewed stone-fruits. It is unusual to my nose, yet as familiar as the face of an old friend. Immediately I associated this perfume with the classic scent of: 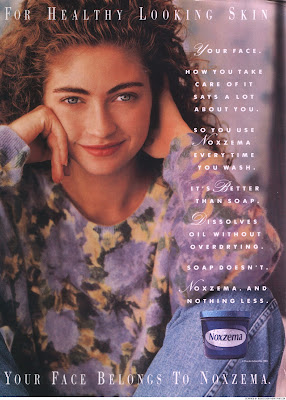 Yes, Charles Blair reminds me of that classic face cleansing cream, Noxema. And whether you look back with nostalgia on Rebecca Gayheart, or if you perhaps share my particular memory of a young and lovely young brunette Meredith Baxter, there's no forgetting the smell of the slightly hard, then unexpectedly melty white goop that said it washed away the dirt and grime while preserving the face's natural oils, leaving your complexion tingling and scented with something suggesting a muscle balm. 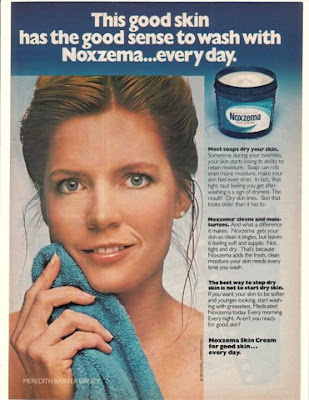 I'm not sure why this scent feels so comforting but it does. I often find bread-y notes extremely appealing in perfumes and there is no exception here. The mentholated aura comes from salicyclates, I feel fairly certain. But as to which flowers carry such a strong dose of them, I'm not sure- tuberose is often named but I want to volunteer Heliotrope... as the menthol smells somewhat of black cherry cough drops as well. But at least I know what I'm smelling rests on a base of rich sandalwood. 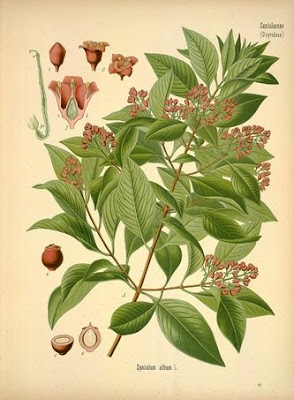 However, the dry down is not like that of any sandalwood I might smell today; it has none of the tangy citrusy oud notes of Super Iso E that are so popular and loud, and used so often in depicting wood notes in perfumes of today.. . instead the wood here is a soft balsamic caress that cradles the minty mellow and sweet liquor hidden inside of Charles Blair. It reminds me of another, much more famous wood perfume, one that is often said to have a delectable gingerbread note... Of course I am referring to Chanel's classic woody feminine Bois Des Iles, another sandalwood scent that veers towards gourmand, which Charles Blair is well in keeping with. If you are lucky enough to spot a bottle of Charles Blair and you like exotic wood scents, give it a try; I think you will be well pleased.

The Vintage Perfume Vault, where the scent of yesterday's vogue lives!

I have a bottle of Charles Blair parfum in my collection and have long forgotten where I got it from. Thanks for the information about its history.

You are welcome, I hope you enjoy and wear it often!

My mother always wore Charles Blair. She was gorgeous and sexy and it was part of her mystique, starting (yes) in the early 60's. I think she brought it home from Paris. She passed away last year at the age of 80. I have two bottles of her Charles Blair with only a few drops in each, but guess what! I just bought an ounce on eBay! But, sorry, I don't get the Noxema connection at all. My mom frequently smelled of Noxema too, but the two scents are nothing alike, IMHO.

Trilby, Congratulations on the ebay purchase. An ounce is a great find, and of such a rare perfume! What a nice story you have about this scent. As for my comparing the scent to Noxema-I think individual experiences sometimes influence our scent associations and at times, these can be very idiosycratic. Your commment inspired me to ferret out my little bottle of Charles Blair and resniff. Perhaps the effect is due to a clove note, (although I admit there are plenty of other perfumes with prominent clove notes that do not have the same impact on me.)