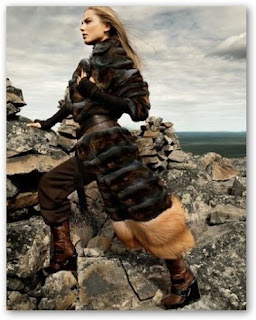 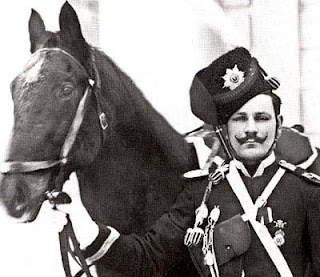 Who doesn't love a good leather scent? Russian Leather has been a personal favorite choice of late. The smell of leather has many favorable associations- horses, plush chairs and couches, new cars, old books, purses, gloves, boots, luggage... those items signify good times, days of fun, travel and the pursuit of leisure. The quintessential Russian model on the right wearing the fur and leather is Ruslana Korshunova, a young beauty who left this world mysteriously well before her time. Not as dramatic perhaps, the story of Russian Leather turns out to be quite interesting as well. The smell of good Russian leather is mellow, warm and quite soothing. Considering the aromatic components that give this type of leather its characteristic scent, it may even be the equivalent of a natural sedative... perhaps just the thing to soothe a troubled soul? Of course to those who love perfume it is not a trivial matter to consider. Perhaps nothing could have been enough in her case. But what about for us, moving through our day to day? Can the smell of leather really calm us? And where does the smell of leather come from anyway? Well, despite the name, it's not all animal! Many of the components that scent leather and create good leather notes in perfume are based on plants. 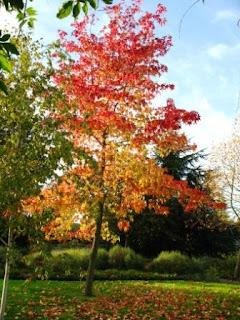 Styraciflua is a decorative tree also known as liquidamber, sweet gum, break-ankle or porcupine ball tree (if you're a kid). It drops those spiky little balls, tripping people who don't watch out. But the tree is pretty and it has traditionally been used in American folk medicine to cure everything from skin lesions to epilepsy to relieve anxiety and alleviate stress. Liquidamber trees produce a fragrant resin, once purified it is called benzoin, meaning a sweet smelling tree resin. It turns out many trees, similar, related, or not so closely related (depending on your sources) produce similar sticky secretions and they are all called benzion. These sweet tree gums have been used since antiquity in many perfumes, certainly in our Imperial Russian Leather. But Styrax is a different, confusingly similarly named tree also used in creating leather smells. 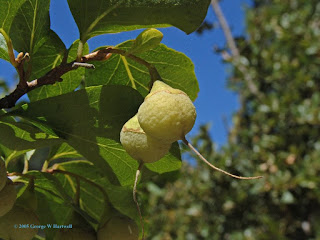 We have a California variety here, Styrax Divivus- which has a strange nick-name: the Drug Snowbell. It produces little clusters of white flowers and globular green pods. In the late summer, the Styrax tree flowers produce a pungent, secretion-like, animal-iodine scent. The flower stem oil of some Styrax are known to give a unique fleshy-leather note in some perfumes. I wonder if anyone has tried to distill that smell from our California special variety, the Drug Snowbell, yet? 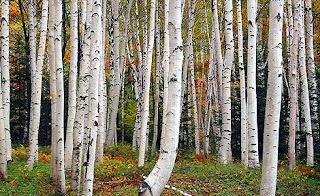 (Photo: BillCasselman)
But Birch Oil is probably the most important scent ingredient that gives real Russian Leather it's characteristic smell. The bark of the birch tree peels off in papery sheets and when soaked in water/alcohol mixture, it forms a "liquor" a watery infusion. Evaporating off the water leaves an oil behind. This liquor is used in processing animal skins basically rotting everything else away, leaving a perfectly clean leather. The birch oil is also used repeatedly to soak the skins, it has a nice property enabling it to dissolve away all the putrefied components. Turns out this oil also contains high amounts of Methyl salicylate, aka oil of Wintergreen. Anyone who has ever eaten a Wintergreen Lifesaver candy knows the strong minty-peppery taste and penetrating qualities of the oil. (This next part has nothing to do with perfume, but if you never tried this as a kid: for fun, go in the bathroom, turn off the light and crunch a few Wintergreen Lifesavers in the dark. You might see something like this:

As Anne Marie Helmenstine PhD, explains, the light is produced by friction, which creates a little blue spark, when table sugar - but not corn syrup- is quickly crushed. It's called triboluminescence. The light produced in this reaction is basically in the same spectrum as lightning which also looks blue if you see only a little bit of it. OK, enough of the geeky science; let's get back to the perfume... 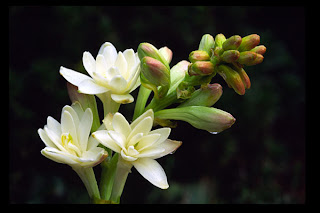 Methyl salicylates are also produced in varying amounts by many types of plants including the heady tuberose. Some insects like the orchid bee use the Methylor other salicylates from various flowers to form their own pheromones. It is natural for man also to include salicylates in his perfumes as well and especially essential to create a Russian Leather fragrance. But the darker side of Russian Leather? 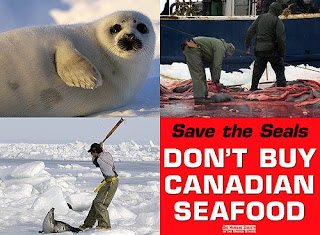 Seal oil or some similar heavy animal fat such as whale oil was also traditionally used in the process of making Russian Leather; it softened the leather and preserved it as well as its distinctive scent. Today, synthetic scent molecules and fixatives are used to produce the same rounding harmonizing effect in perfumes and spare the animal as well. As a final step in preparing actual Russian Leather, it is treated with Birch oil, Sandalwood resin and Gutta percha(yet another type of tree resin) mixture to give it increased strength and a pleasing color. But the animal fat and Gutta percha do not leave the leather yet with an acceptable smell, so a mix of benzoin, tonka beans, orris root and more sandalwood are used to sweeten its scent yet more. So finally a list of notes from which we can imaginatively build our Russian Leather cologne: white flowers (tuberose and lily of the valley), essences of birch bud oil, pine and willow tree saps, Styrax flower and benzion, sandalwood, plus a synthetic animal-like fat molecule for fixative. And something you do not see mentioned from actual Russian leather preparations but that is smelled in the cologne (and perfumes), is hesperides or citrus. In Imperial Russian Leather there seems to be a combination of fresh green bergamot and a sweeter orange note. 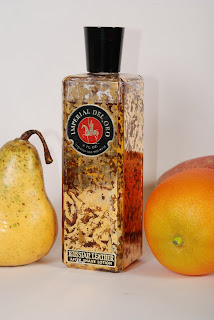 So even though I can't find an explicit list of notes for this vintage Russian Leather made by Imperial Del Oro, its scent likely incorporates many of the above notes. This particular blend is a very pleasing, being a smooth and strong. Russian Leather has been around for quite a while and Russian leather colognes have also been popular throughout history as well as it is mentioned so frequently. But today you will not find too many. Of course leather is present in many fragrances as a supporting member. But the opulent yet tough Russian Leather remains difficult to find. My favorite, hands down, is the most famous Russian Leather fragrance, Chanel Cuir de Russie (early 1910s). 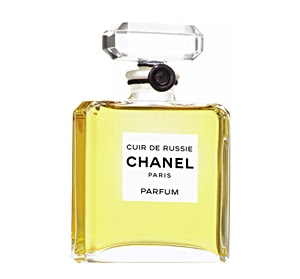 Thanks to Fragrantica for this great image of the modern parfum bottle. I absolutely love this scent (vintage extrait version) and I liked it even better when I tried it diluted 1:5 in the Imperial Del Oro cologne. There is a particular lovely sweet amber incense note that fires up late in the dry down of the mixture- but neither scent alone. For perfumista beginners or those on budget, you can get decants of both of these scents at the better perfume decanter sites http://www.theperfumedcourtdecants.com/ is hard to beat for their selection, quality, knowledge etc- (I hope they don't k*** my a** for naming names). Also, they may still have some affordable Russian Leathers by Demeter (the commercial house that turns out scented impersonations of everything from Altoids to Dirt) you could try. However I think even all of the Demeter Russian Leather variations are actually discontinued so finding a full bottle might not be so easy. I believe Imperial Del Oro Russian Leather was a local California product, produced into the 1970's. Don't let the potential cheesy factor keep you from trying it. This is a great vintage alternative to the more costly and harder to find Russian Leather fragrances out there. Imperial Del Oro made Russian Leather cologne, aftershave and soap.
The Imperial Del Oro verison of Russian leather is straightforward, mellow and strong. However, the scent is designed to be splashed on after shower or shave and it lingers accordingly - for several hours at least. It imparts a rich animal warmth with a candied orange glow. By itself a discreet veil or for those who like their leathers amped up a bit, a perfect base. 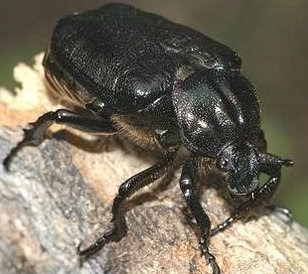 Post Script: I almost forgot to include another geeky bit of science related perfume trivia. The Hermit beetle, a medium (30 mm) Scarab beetle known as Osmoderma eremicola is also known as the Russian Leather Beetle because the male of the species emits a pheromone that gives it a strong smell of Russian Leather. These beetles live in Europe (except the British Isles) in old hollow trees (some never leave the tree for their entire life cycle = hermits). I've heard them referred to as "flower chompers" too, although in the wild they will reportedly eat decomposing wood as well. People do keep the females as pets, feeding them bits of sweet water and other decomposing stuff but the male beetle is the only one that makes that famous smell!
Posted by Amelia at 6:17 PM